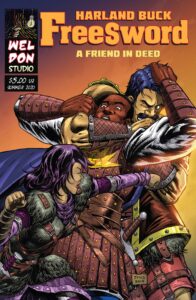 Holy Hellballs has it been sometime since the 7th issue came out and ended with that cliffhanger! But my oh my was the wait worth it to see the follow up to its end! Way back in issue 5, Scott introduced the group known as the Red Spears and some trouble ol’ Harland had with them during that issue. At the end of issue 7, we saw some trouble happen for Harland where he ended up arrested for a crime he’d committed and poor Kendall Obassa having to be involved in his arrest. I love that we’re getting a bit more world building here with this call back and the apparent consequences that’s resulted from it considering his arrest involves the Red Spears. Whom are all rather tetchy about what Harland did to them during the 5th issue. There’s also another call back to another character in this issue as well so that was fun to see! Now in order to deal with this latest issue, Harland’s gonna need to do something that doesn’t involve a fight or two! Something that he’s not used to doing for that matter. Which is essentially relying on someone else.

And that’s where Kendall comes in and effectively get to be the star in this issue as he tries to find someone who will speak in Harland’s defense. Which as we readers got to see, proved to be no easy feat for one reason or another! But I love what Lilian Rose does in regards to Harland, even though she would have a right to say no to speak on his behalf considering their last encounter and all. But it shows she isn’t that willing to be that low but it does make me nervous for her fate considering the beef the Red Spears have with Harland. And I am curious to see how that will play out in later issues when Scott’s able to get around to that! I can honestly say I wasn’t expecting the ending we got at the end of this issue but it just seems perfect none the less and is another thing I can’t wait to see how it plays out when the time comes. Scott did great for pulling that twist at the end and it shows his writing talent is growing with each issue. And that’s just beautiful. 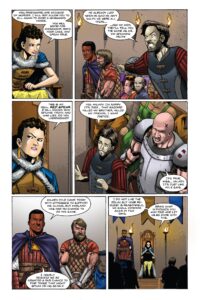 Harland Buck: FreeSword is a sleeping giant that folks need to stop sleeping on and help spread to more eyes across the world. Especially if you loved the Chris Claremont days with the X-Men way back in the day. Now I am curious if the events of this issue means that Kendall no longer feels obligated to Harland and just fully sees him as a friend now or still feels an obligation. Its a guarantee though that Harland’s going to feel an obligation and absolutely hate it with his signature grouchyness! Especially with the latest wrinkle to hit his life after all was said and done!

Summary: Kendall Obassa’s loyalty is put to the test, when he tries to repay Harland Buck for saving his life. 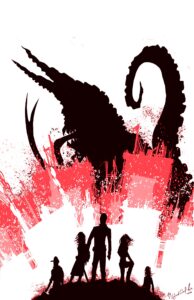 Long has the fun concept of Kaiju been in our minds for as long as I can remember with the most famous of all the Kaiju being the Big G, Godzilla, himself. There’s been quite a few adaptations here and there over the years, some with the Big G and some without and Johnny Craft’s Life Under Kaiju is just the latest entry to be added to the world of Kaiju. Life Under Kaiju was also a successful project on Kickstarter as well during last year and is obviously one of the better things to have hit last year. Life Under Kaiju is Godzilla meets The Walking Dead meets Howard Stern and its a fun and interesting combo in my view. Especially as normally, we see the big bang of events where a monster like Godzilla is attacking and all that good fun stuff but never really the aftermath of it. Which is where Life Under Kaiju comes in as while we see how things are beginning with a variety of monsters emerging from the Oceans to cause all kinds of havoc with no light at the end of the tunnel thrown in for good measure. 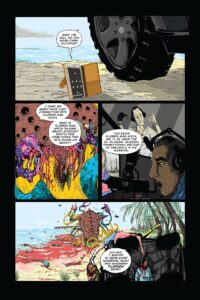 The story ultimately asks the question(s) of how does Humanity survive when all is said and done (or continuing to still be done for that matter) and for how long will one be safe. Something that Radio Shock-Jock Derek is still trying to figure out by the end of the first issue after a time jump of several years. Johnny, Edgardo Granel-Ruiz, and DC Hopkins don’t hold back on the utter devastation the Kaiju cause and its wild to see, not to mention saddening (and kind of comical) at times for one reason or another. I’m also loving the fact that Johnny touches on the problem of trying to get the Hell out of dodge via the Highway when something bad happens and how that causes its own problems. Now how Derek and the others he ends up with avoid this problem is anyone’s guess and how he and the others get to where they are by the end of the first issue is also anyone’s guess. Leaving one with quite a few questions as there’s plenty of story to see and learn things given the time jump. The ending especially makes one question things thanks to Derek’s special visitor!

Making me all the more eager for the release of issue 2 whenever the time comes!