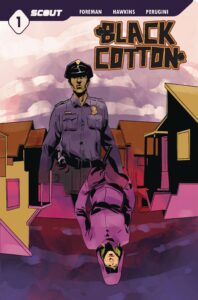 Black Cotton by Patrick Foreman and Brian Hawkins is a creation that essentially flips the script of known history by making it so that its African Americans who aren’t the minority anymore and instead, are essentially in charge. Making it so that Caucasians themselves are now the Minority. Its interesting to see and something I’d honestly love to see done with Native Americans. The fact this is done in black and white was a surprise to me as I had expected a lot more color beyond the cover itself. Making it (at least for me) something of a challenge to tell characters apart skin tone wise unless you’re really paying attention to detail as us readers read to the end and see how things are handled after a white woman is shot by a Police Officer by the name of Zion Cotton. And considering that things are in the reverse in this world, its definitely easy to see that the excuse of ‘I thought she was armed’ is not going to do much here. With the reverse order being present here, a Police Officer shooting at a Minority and the serious problems around that hasn’t had its impact diminished in any way.

And given the subject matter of this title, I can see some folks rumbling about it given just how close to reality this book is and most typically seek to escape reality by reading comics as it is. Especially after how things went during 2020 when things came to a boiling point between Minorities and the Police. Quickly, we come to see that the Cottons are not handling things well in the aftermath of Zion shooting an unarmed white woman and I’m curious to see how far things are going to go in this story of Foreman and Hawkins’. Its a little on the disgusting side that the Cottons clearly think throwing money at the family of the young woman who was shot will resolve everything and I can only imagine the reaction that’s bound to happen in the beginning pages of issue 2. Will Justice be had? Will Zion have hopefully learned a lesson from all this when all’s said and done? And most importantly, will the rest of the Cottons learn a little much needed humility? Only time will tell as this story goes on but I look forward to finding out!

Black Cotton is a title that is not going to be for everyone and that’s something to keep in mind when picking this upcoming Scout title on February 10th. So be sure to get your pre-order on while ya can with the Diamond Code DEC201650. It should also be noted that Black Cotton is Patrick Foreman’s first foray into writing comics and he picked a Hell of a first gig to go with with this title!

Summary: Set in an alternate reality where the social order of “white” and “black” is reversed, an elitist family, the Cottons, are rocked by a tragic shooting that begins to unravel long standing family secrets that could not only destroy the family but also divide the fragile social climate of the world.