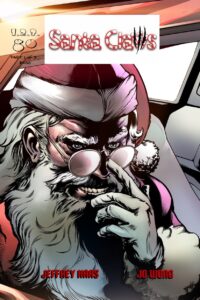 Christmas is just right around the corner and with it, comes things like the debate of whether or not ‘Die Hard’ is a Christmas movie for example. There’s also the numerous holiday themed films with Romance at the primary center of said holiday themed films and a variety of other things related to Christmas and the holidays in general. Jeff Haas’ first issue of Santa Claws is the latest entry in the world of Christmas themed material but with a Horror spin on it instead of some cheerful thing. Along with proof that despite the efforts of some parents, some kids are dumbasses and have to learn some things the hard way. Something young Jeremy clearly does and is evidently lucky enough to be alive to talk (write) about it later on in adulthood. Though how well that turns out for him remains to be seen given this is the first issue and all. Our young Jeremy wants the hottest new game system out on the market and thanks to a friend of his, he’s got his hopes up a little too high.

This, combined with his mom’s unfortunate luck in not being able to afford it and telling him the truth about Santa Claus makes for a bad combination over all. And goes to show that just because you have two jobs doesn’t mean things are gonna be in the bag. Jo Wong’s art style for this title is a little on the cartoonish side but given this story features an evil Santa called Santa Claws with very sharp teeth and a Nazi Reindeer, it works for this book in my view. Greed is no one’s friend unless you’re a real jerk and it can blind you to the obvious and make you forget you’re not supposed to go off with complete strangers in Jeremy’s case. I wouldn’t be surprised if he got grounded for years once he found his way home! Though I have to wonder, does Claws have some kind of system that tells him when a kid learns the truth about Claus? Or was coming across Jeremy pure luck (or bad in Jeremy’s case) on his part? Then again, a certain crystal ball might have something to do with it!

I’m curious to see where Jeff Haas takes this story next, especially after the cliffhanger at the end of this first issue. Will there be a revolt? Will Jeremy make it home? Or will something much worse happens? Only time will tell! Santa Claws #1 is set for a mid-December release!

Summary: Santa Claws comes to claim those children who no longer believe and use their greed to turn them into mindless elves to work his factory.