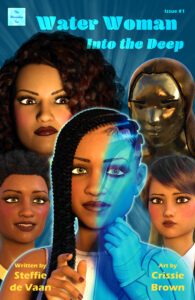 Domestic Abuse is a tough subject no matter where it pops up in media and in everyday life and can be difficult to overcome. And this is a subject that is covered in Steffie de Vaan/Crissie Brown’s Water Woman: Into The Deep’s first issue (and presumably through out the series itself) and quite frankly, leaves me a little on the angry side where Romain Ricci is concerned. Niqui Salinas-Aguado is quite clearly an awesome chick with a great gift for art and how she ever ended up with Romain is a mystery to me. But thankfully as this first issue (currently on Kickstarter) goes on, we see our girl attempting to take back control of her life with some very near disastrous results. Which leads to Niqui having quite the experience afterward thanks to an Alien presence in the deep waters of the Bermuda Triangle. Said Alien presence being something I look forward to learning more about in future issues. And a character who literally becomes water isn’t something you necessarily see a lot so its rather nice to see here.

Which is also one of the reasons Vaan/Brown did this book. But more on that in a bit as I want to talk about a few… Issues, I had with this first issue. The first being the pacing as things felt a bit fast paced and could have benefitted from a slower pace. Very easily things could have ended after Niqui entered into her new circumstances and then go from there in a second issue with her return being covered and how that’s handled. But of course this is just my view all things considered. Her mother’s reaction (or lack of depending on your point of view) is something I felt could have been done much differently as she just feels a little too accepting of her baby girl’s new circumstances. Perhaps it was done this way intentionally or perhaps it just wasn’t something that was thought of but it is at least something to consider for the future considering this is Vaan/Brown’s first title together that they have plans to continue.

Allowing for folks to see more of the world they’ve come up with here and how Niqui continues to adjust to her new found abilities as someone who can be made up entirely of water. Along with also dealing with the fallout of her little revelation to a new friend of her’s. Now I hate being negative about things but one other thing I want to cover where my issues are concerned is that I’m not entirely sold on Crissie Brown’s CGI art style for the entirety of Water Woman. It doesn’t really feel/look natural but perhaps in future issues that’ll change.

Though it might not seem it at times, there is hope for those suffering from Domestic Abuse. And there is help for those dealing with it. We see an example of that hope within the pages of this title where Niqui is concerned and I am looking forward to seeing her journey progress even more away from the Romain Ricci era. And if this is something you want to see for yourselves, do be sure to check out the Kickstarter currently happening with 64 hours left to go!

Summary: Into the Deep is a story of art, abuse, renewal, and justice featuring Niqui Salinas-Aguado, a Miami sculptor. Niqui’s girlfriend Romain Ricci leaves her to drown in the Bermuda Triangle, but deep-sea aliens transform her into a water-being. Her newly unveiled mermaid slide sculpture calls Niqui home, where her mother Pearl, a marine microbiologist, helps her control her liquid form. Niqui discovers an ally in FBI Special Agent Shan Wong, who suspects Romain of money laundering, and together they bring Romain to justice.