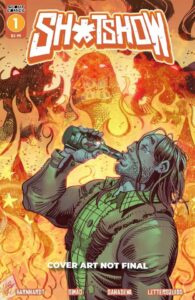 Review: Sh*tshow #1 is a fun experience and an interesting dystopic look at superheroes years after they failed to save most of the world from the crushing might of a powerful demon. Most of issue #1 flips back and forth between present day, showing the dire straights our surviving heroes have found themselves in, and the event from 10 years prior the created this new world.

Barnhardt keeps the narrative focused on the characters, hinting at how the world became a tragic dystopia without ever fully showing it. The one fight we really see are the flashbacks to the heroes’ first encounter with Balam the demon and his subsequent massacre of what appears to be this world’s top superteam. We never see Balam actually wreak havoc across the globe but we don’t need to as it’s felt in the modern day scenes where Legend and his family, the McCoys, are broken and trying to make a living at a carnival.

Legend, this world’s equivalent to Superman, is no longer the shining beacon of hope he once was. After losing his friends he became a drunk, a druggy, and a piss poor father. His kids do their best to take care of him but even they can only do so much. Frigid Brigid, Smokke, and Morph are members of the Magnificent McCoys and we get to see parts of each of their personalities in this book as they try to take care of their dad and entertain large groups of people at their carnival. 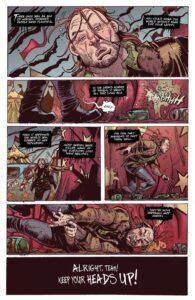 We also focus on the character of Macabre Mel, sort of like this universe’s Raven (from Teen Titans). A cajun sorceress who may or may not have something to do with Balam. She’s one of the very few survivors from the original battle against Balam and too has fallen into hopeless dire straights. Earning a living at Legend’s carnival as a psychic. She’s not as off the rails as Legend has become, but her heavy guilt is still felt weighing her and everyone else down.

What Barnhardt does well in this issue I felt was give this world a real sense of presence, like it actually exists and these characters are truly, hopelessly effected by their actions in the past. The weight of everything is felt, and you can’t help but really feel sorry for Legend, Macabre Mel, and Legend’s family. As well as all the original heroes who didn’t make it to the other side. The character work in this issue is pretty darn great, and I’m excited to see where he takes everyone. With how gruesome this first issue was I can only imagine a lot more characters are gonna die in really awful ways. 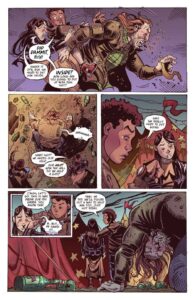 The things I didn’t like about it are that I do wish we would’ve spent more time in the wider world that these characters inhabit. What I mean by that is that so much time is spent showing two different distinct events that we don’t get to see things like how Balam actually effected the rest of the planet outside these few characters and this pocket of land they currently live on. We don’t see how many of the normal people are feeling, and there’s a sense of rushing for most of the pacing of this book instead of slowing down and letting everything just sink in.

I really enjoyed the art and colors from Simao and Sahadewa. Simao’s fight scenes are full of motion and lot going on at once, and the gruesome parts and handled deftly and with a lot of punch. There’s a ton of emotion in the character’s faces and especially in their eyes that you can just feel what they’re feeling in any given scene and it feels so organic. Just on the cover alone the lifelessness in Legend’s eyes are palpable and from the get go you know you’re in for a treat.

And Sahadewa’s colors are so vibrant and lends this world a flair of life to it that compliments Simao’s art really well. You can see the levels of what’s going on at any given time because everything has its place to come to life in every single panel under Sahadewa’s thumb. I feel like these two are gonna go far in this industry. Everyone on this team brought their A-game.

Finally, the letters from Lettersquids. Full disclosure: I’ve actually worked with Lettersquids on some of my comics, he’s a great guy and great at his job. None of his works look the same and that makes him a versatile force to be reckoned with. I’m so so so happy he’s getting bigger projects to work on. His letters on this book are no exception to anything I just said, the guy knocks it out the park. The captions that introduce each individual character throughout the book have their own unique feel to them, everything flows really well and feels like it fits in with the art of the book organically, plus no caption or speech bubble feels over done or like it’s overtaking the art.

Sh*tshow is a good time despite it’s dystopic setting and I for one am looking forward to the next issue!

Summary: There was once an Age of Heroes, a time Earth was protected by the demigod hero Legend and his band of heroes called Legend’s Legion until one day, the three-headed demon Balam was summoned to the planet. In the ensuing fight, the powers were ripped away from any enabled beings on the planet — heroes and villains, alike. Battered, broken, and losing his entire Legion in the process, Legend was able to cobble together whatever remaining powered beings he could find but by that time, Balam was long gone.

To try coping with an all new world, the heroes banded together to form The Magnificent McCoys, a traveling circus where the performers use their powers to entertain the masses in a time where powers are rare. A god with a dying star for a heart, Legend has taken Balam’s destruction worse than anyone and has since become a crippling alcoholic. Then suddenly one day, Balam returns. Will Legend be able to stay sober long enough to use his powers and end this threat once and for all or will he give up only to doom humanity forever?