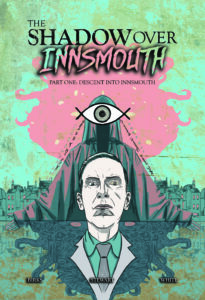 I had meant to cover this in the week before Halloween but circumstances kept that from happening but that’s okay, cause I’m checking this out now on a day that holds a lot of importance for us Americans. Namely, who wins the Presidential election. Making for a great way to not think about the serious things where this is concerned. I’m honestly not a huge Horror fan and thanks to that, I had no idea this was an adaptation of HP Lovecraft’s. But that I think helped me enjoy this as I’ve largely found lack of prior exposure, or at least having an open mind, helps a lot to enjoy adaptations of a lot of things. As someone who is also rather cheap at times, I can relate with Robert Ormstead. Albeit, his reasons for cheapness are more than likely different than mine. Especially as this takes place in the late 1920s and cheap back then was likely a lot different in comparison to today’s cheap. And this guy, he’s got somewhere he’s wanting to go but that’s hampered by the strong lack of funds he has.

But then, thanks to various comments and a museum, our boy Robert’s curiousity ends up outweighing his need to get to where he’s going. Which… From the sounds and looks of things, is a very bad thing and is why you should listen to warnings. But then we wouldn’t have much of a story if that happened I suppose! I also want to take this time to say I am appreciative of the small use of coloring for this first issue that RH Stewart pulls off so nicely. It just fits with the horror theme and the progression of the first issue as things go along. The lack of dialogue later on is a nice touch as well as you’re just seeing Ormstead’s exploration of things once he’s in Innsmouth and not really having a full on clue what he’s thinking. I’m curious about why the uhh… Townspeople of Innsmouth look the way they do and if they are even really people at all. Suppose I should look up and read the original at some point after this title for a better understanding of things!

And with that cliffhanger ending at the end of this first issue, I can’t wait to see what happens next! It should also be noted that a Kickstarter is in the works to help bring this adaptation and its other two issues into one collection set for release in 2021! There’s also currently a Kickstarter running for the first issue as well!

Summary: Robert Ormstead is on his way from Newburyport to Arkham the cheapest way possible. Unfortunately, for him, this means taking the bus through shadowed Innsmouth. Armed with his notebook, he intends to make a day of it studying the local architecture and getting to know more about this mysterious place that neighbouring towns shun. Why are the inhabitants so unwilling to speak to him, and what curse afflicts them which causes their faces to change and their eyes to stare, unblinking.