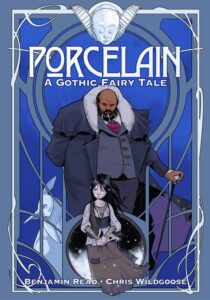 Having read this twice now and liking it even more on the second read through, I’m a little ashamed of myself for not having done a review on this title much sooner. Despite some unpleasant moments this book has, Mr. Read has crafted together a truly wonderful story here that definitely needs to be in front of more eyes. Granted, this has nothing to do with superheroics but I’m sure folks can manage despite that. Especially if you are looking for something different. And Porcelain is definitely that something different. From the very heavily felt British presence in this book (which where it came from makes sense), to the light hearted moments between an old lonely man and a young girl named Child (normally a fairly creepy thing but not here), to a slight case of magic, and the unfortunate dose of tragedy readers will experience as they read this, Mr. Read truly has crafted together a great masterpiece. Helped even more so by the wonderful visuals done by Chris Wildgoose, who’s art wonderfully comes to life even more so thanks to Andre May. Jim Campbell does a fine job with the lettering as well, but it really shines through with certain characters.

Though I have to admit, the term ‘cowardly squidfart‘ is a new one on me! Makes me wonder if that’s only something heard across the sea or what. And in my view, you haven’t seen pure joy until you witness the old man and Child having all sorts of silly fun. Like the two of them having a good old time dancing. You can easily tell she brings a new and bright light into his lonely life. Its a pity however that the good times couldn’t keep on rolling, but I do suppose if it was all happiness and dancing then part of this title’s name just wouldn’t be all that fitting. I think this could also serve as a warning for any youngster to not go messing around with things, as you may never know what form of unpleasantness you might just find. Whether or not history will wind up repeating itself, only Benjamin Read knows! And hopefully for the older Child we get a brief glimpse of in the end, things will have a far better turn out. Though the fact she’s got a replica of the Old Man hanging around, just really may not be a good thing. I highly recommend this to everyone, especially if you are looking for something un-related to the Super Hero genre.

Editor’s Note: You can find yourself a copy of Porcelain: A Gothic Fairy Tale either at Improper Books or at Page45!

Summary: Set within a world that’s a darkly magical echo of our own. It follows the story of a street urchin, known as Child, who leaves the cold streets of a snowy city behind when she climbs the high wall into the Porcelain Maker’s secret garden in a bid to steal whatever she can. The Porcelain Maker discovers Child trespassing but, amused by her audacity, he offers her the chance to stay. He’s a lonely man, kept company only by his alchemically-powered automata, and he and Child form an unlikely friendship.

Shut off from the world beyond the wall, Child wants or needs for nothing as the Porcelain Maker heaps affection and luxury upon her, indulging her like a daughter. In return, she can do as she pleases, except for one command, one rule that must never be broken, she must not look behind the workshop door. 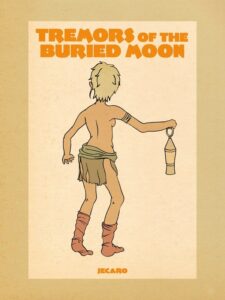 Summary: Mysterious orders from an ancient Tree Maiden send Mira the Pairie (a type of forest nymph) to the depths of the underworld in a quest to discover the secrets of the Buried Moon. Along the way, Mira comes across Walking Corpse Fairies, hungry flowers, and a few helpful friends as she delves deep into an unusual subterranean landscape. Will she find the Buried Moon? And, if she does, will she seek to understand it or be spellbound by its power?

Tremors is quite the fascinating read, full of whimsy and originality. This is a story that, from what I can tell, takes place long after the story in the original Grove Nymph comic that I reviewed awhile ago. It’s full of Jecaro’s signature art style of soft browns and greens for color, and fully nude but specifically “unsexy” nymphs who lead us through the adventure.

I really enjoyed Tremors, even though narratively it does have a lot of problems; like some of the story moving too fast and some subplots being resolved hastily. And yet, at over 100 pages of comic the story feels very fresh and calming. I think that’s the effect I love so much about Jecaro’s storytelling style from Grove Nymph and Tremors of the Buried Moon: I never feel like I’m wasting my time or wading through water. I’m just relaxing and enjoying a fun story. The dialogue is also mostly silent, so it’s also a quick read just in general.

Something interesting I have noticed about Jecaro’s stories is that even though the characters are all nude, except there is plenty of clothing being worn as well in this story specifically, as a story with character moments, dialogue, message, and predicaments Mira finds herself in, everything is relatively all ages friendly. And I think that’s great. If you can read this without getting turned off by boobs, then you’re gonna have a very innocent and fun time; I think that’s great.

Tremors explores much more of the world surrounding Mira, along with a lot of its mysticism. It really opens up the world of Mira’s faerie realm. Without going into too much detail, some of the things we get to see range from undead nymphs to maidens from far off in space; as well as a very unique take on becoming a mermaid. One of the downsides to Tremors though is that at times, like I mentioned before, it feels like the plot is going to fast – mainly when it comes to resolving plot issues. And the ending is rushed which, at the page count this OGN boasts, shouldn’t of had to happen. There is also a lot of unexplained “conveniences” like when Mira’s sister is giving her the clothes & items she’ll be taking with her on her journey, and Mari gives Mira three specific items that, obviously, become useful later. But Mari acts as if she already knew they would, and I don’t understand how that was possible.

All in all though, this is a great read and something worth checking out. I was very impressed, more-so when I read that this was Jecaro’s first self-made comic book. Not too shabby at all.
Final Score: 4 Frog Sprites out of 5 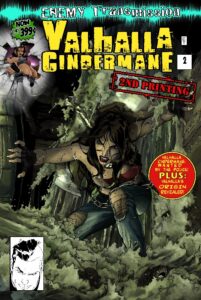 Summary: Everyone’s favorite Bad Valkyrie with the battleaxe in the Big Apple, Valhalla Cindermane, is still at it – searching for her lost love and causing massive property damage along the way! Actually, she’s kinda dead right now, but she’s not going to let a little thing like that stop her! This one’s got Valhalla’s origin to boot – and who’s that guy thrashing bikers and asking questions about Val?

Now its been awhile since I laid my eyes across some Valhalla Cindermane. Luckily for me I had issue 1 within reach to read all over again to quickly get familiar with this bad ass axe wielding Valkyrie. And then get on to reading the second issue of this comic, something I should have done a long while ago but never did for whatever reason. But hey, now’s as good a time as any though right!? One of the things that wound up really sticking with me after reading the second issue is Valhalla’s rather witty statement about how only death and taxes are the only true certainties in life. That is likely the best part of this whole comic in my view. I’m also happy to see the creative team Mike had for this in the first issue also present in this issue as well. They all do a phenomenal job in bringing Valhalla Cindermane and the world she’s in to life wonderfully well. Though I do admit I find the flip flopping of past and present events to be a little confusing at times since there’s no real warning when it does happen. Although when her origin is revealed, that’s pretty easy to suddenly see when that bit of a flip and flop happens.

Aside from that, I really have no other complaints. And I am liking how things are mixing up with Perilous in this story as its starting to make sense for why he’s even showing up in this comic as he did in the first issue. I remember seeing images here and there on the Facebook pages for these two characters and its starting to become pretty clear to me on just why Valhalla and Perilous duke it out later on. And sheesh, the cover of this comic gives you a pretty darn clear idea of the fact you should never get her coming after you! The look on her face alone is enough for me not to try anything! Hopefully Perilous will also have learned a lesson in how not to perform God like acts in full view of the public while Valhalla’s doing some public birthing services. Especially when there are those who will use it to their advantage. Like Riothide for example. And the little I’ve seen of this guy has me thinking of him as a depraved wacko. I can only imagine how much more of that we’ll see as this title goes on.

Hopefully for the little girl who unfortunately gets involved in this thanks to Valhalla, she won’t need too much therapy when this is all over with. Course with such a nice guy like Perilous around, I’m sure he’d be willing to foot the bill! So if you’ve yet to get in on the greatness of a slightly crazy, but bad ass Valkyrie, what are you waiting for!? Get on it!