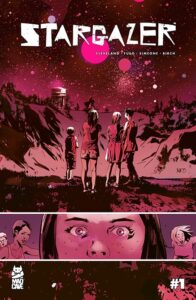 While reading this offering from Mad Cave Studios that came out last month, one thing that came to mind for me by the end of this first issue is a film called ‘Fire In The Sky’. Which is said to be based on actual events that happened. Now I could have just as easily thought up anything else considering this relates to Alien Abduction and lack of belief but that film came first. Mostly because its just something that’s been with me ever since I saw it when I was a much younger Wrecks. Only… Significantly less terrifying than being home alone and recording the second Exorcist film while a young Wrecks. Here, we have Shae and her brother Kenny, along with two friends of Shae’s experienced something when they were youngsters themselves. Only it has more of a profound impact on Kenny than it does the others. Or so it seems as we haven’t really seen the impact it may or may not have had on the other two just yet considering this is the first issue and all. Said impact has also continued into his and Shae’s adulthood.

Shae has also clearly tried to move on with her life as much as she can to the point of getting to experience Marital Bliss. Kenny on the other hand, hasn’t and is still trying to learn more about that time back in the late 90’s and get folks like his sister to believe him. Unfortunately it seems Shae is at her limit now and given a remark she makes it makes me wonder if Kenny’s issues had something to do with it or if it was something else. Something I hope we get to learn more about in future issues and if whether or not a certain drug had one Hell of an impact on Kenny or it really is Aliens. Aliens whom are apparently coming back but this is potentially a bad thing? Way to be cryptic there, Kenny boy! This was an enjoyable and interest grabbing read for me and I can’t wait to see what Anthony Cleveland has in mind next for this book. Along with how Antonio Fuso will bring it all to life as well when the time comes!

Summary: Years ago Shae, her brother Kenny, and two childhood friends experienced a traumatic, unexplainable event that left Kenny scarred for life. Kenny commits himself to the belief that what they experienced was an alien abduction. Twenty years later and the friends have since drifted apart, but the sudden, mysterious disappearance of Kenny leads the group to reunite and discover the truth of what took place all those years ago. 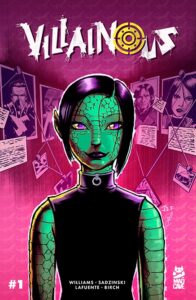 Summary: Tilly, one of the newest super-powered people to join the Coalition of Heroes, is doing her best to navigate the dizzying world of superheroes. Working with her idols should be a dream come true, but when she learns the truth, Tilly’s dream quickly becomes a nightmare. Now, Tilly has to make a choice — Get in line and stand with her heroes, or take a stand and risk becoming something more… Villainous.

Superheroes and Supervillains, a staple in Comic Books since practically the very beginning and because of that, we’ve had the likes of Superman, Batman, Spider-Man, the X-Men, the Avengers, and numerous others. Just about every creator out there has tried their hand at adding to the pot of Supers through either their own creation or getting to write a story for the Big Two. So its definitely no surprise that Mad Cave is dipping their pens into the Genre as well with this second title of theirs in the Genre if one counts Hellfighter Quin and I’m certain some do! And before I get further into things, it should be noted that both Stonie Williams (a fellow Okie!) and Jef Sadzsinki were among the winners of the 2018 Mad Cave Talent Search! A very belated congrats to the two of you! Also, a congratulations to everyone who has won the Talent Search since its inception! You good folks all can help lead the way to more years of Mad Cave with an greater selection to choose from in the process!

Now… With that out of the way, on with the review! I like that instead of another male lead, Villainous’ lead is a young lady. One who has quite the Reptillian appearance for that matter as well and I have to say I like it! Stonie and Jef easily could have gone with a more normal like appearance for our young Matilda Anderson but then she wouldn’t get such a cool codename like ‘Rep-Tilly’. I’m assuming she’s your standard teenager given her youthful appearance (though her Reptillian looks could easily make it so she’s actually a lot older) and the mention of furthered schooling at one point. Which is fine by me as there’s potential here to see where things could go for her if there’s an intention for a long running series with her. Though given the unfortunate spot of trouble she unintentionally finds herself in by the end of this first issue, there’s no telling how much of a future she might have! As this is essentially the classic origin story, we’re not getting flipped back and forth between the past and present to learn about things. 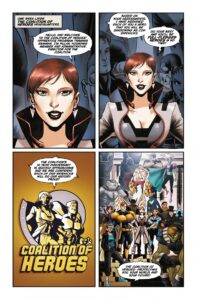 Though that could still happen regardless given the history that’s clearly there beyond Rep-Tilly considering the Coalition and the Shadow Order. And considering what we see within these pages, it makes me wonder just who of the two groups is the real bunch of good guys. Since its apparent that the Coalition seem to be shady given what they implicate Rep-Tilly in by the end. And that, my friends? Honestly has me excited to see where Stonie takes things next and how RT will handle it at all given her relative inexperience. I’m also liking that in addition to the history (one that clearly has a lot to it) that has been created for this title, we are seeing the work of training the next generation of Heroes without needless drama that’ll set the Status Quo back to the way it was before. Much like how its been done in Manga/Anime like One Punch Man and My Hero Academia. Its material like those two and this that shows its okay to leave the Status Quo behind and just keep going with the new instead of reverting.

Mad Cave isn’t afraid to try things and its great as otherwise, stagnation would be happening and that’s never a good thing. And can I just say that Justin Birch appears to be the new Ed Dukeshire of Lettering? He’s practically everywhere it feels! Or at least in Mad Cave anyway and there’s absolutely nothing wrong with that! Hopefully we get to see his work in more and more books through out the Indie Comics World as time goes on. Which is likely already happening as it is so don’t mind me if that’s the case! I tend to be a little behind as it is! Anyhow, I’m excited to see what happens next for Tilly and if her journey will result in the downfall of the Coalition or if something else will happen. I’m also curious to see if there’s more to Tilly than just her Reptillian appearance (whom has some amazing facial expressions by the way) or if that’s merely just it for her. I’m also happy to say that Villainous #1 will be out October 14th! That’s right! This Wednesday, folks! Get on it, or get Pillar on ya!