“Decisions: A Minor Variation from Cosmic Times, now funding on Kickstarter, is a supernatural slice-of-life one-shot, with an edge.” 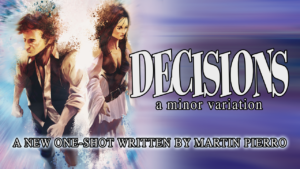 Following the successful Kickstarter campaigns for From Blood issues 1, 2, & 3, Martin Pierro has launched a new campaign to help fund his latest project Decisions: A Minor Variation. Under the Cosmic Times banner Martin has assembled an amazing team of artists to bring this special one-shot to life and is seeking funding to make it happen. 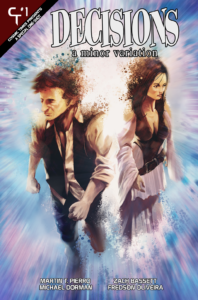 Decisions: A Minor Variation contains TWO stories both written by Pierro, the first “I hear a Train a Comin” finds John, a man literally at a crossroads, he has lost all hope, he is giving up on his dreams and his very life. With time running out an etherial guide visits John to try to turn him down a different path. This story features the amazing artwork of Fredson Oliveira.

The second story “My Brother’s Keeper” features artwork from Michael Dorman. The story begins at a funeral, we find Quinton grieving the loss of his younger brother. In anger Quinton and others blame another boy – Dante for leading his brother down a path that brought him to the grave. Two etherial guides arrive and take Quinton on a journey through his past that will change his perception and will force him to face a hard truth. 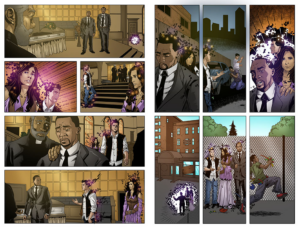 As with the previous Decisions one-shots, these are stand alone stories that are very much grounded in the real world with just a touch of the supernatural. Funding for this project ends October 10th at 10:10 PM. Reward tiers start at $3.00 (US), we are seeking $1,500 in funding to cover printing and shipping costs.

The Kickstarter campaign can be found here – Decisions: A Minor Variation

About Cosmic Times
Cosmic Times Media Group LLC. is a south Florida based comic book publisher, established in 2008 by writer/publisher Martin T Pierro. The Cosmic Times catalog of comic books and graphic novels continues to grow, with such titles as Arthur: The Legend Continues, From Blood, Chaser Platoon, Sugar Boogarz and Deep Space Tragedy. This wide array of titles continues to push forward the mission of Cosmic Times to bring unique concepts and ideas to the comic book market … always placing quality storytelling above all else.