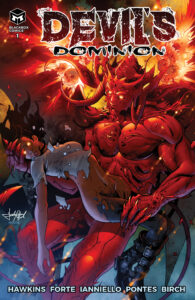 I’m not going to lie, when I saw this promoted on Twitter by Brian Hawkins and took a look at the cover, I legit thought this was gonna be a raw/mature book in terms of adult themes. Like lots of nudity for example. What I got instead was something the complete (for now at least as this is just the first issue after all) opposite of what I was thinking. And that? That I am completely with. Devil’s Dominion is the first title I’ve had the pleasure of reading from the Blackbox crew. A crew who got started in 2016 and in the last year has started to really rise up (In my view that is) with their selection of titles. Again, that’s just my view point and I could be entirely wrong but either way, the Blackbox crew are here! Now you readers all know I love when Biblical stuff makes its way into the world of comics in one form or another and Devil’s Dominion is another form of that sort of thing nicely enough.

Devil’s Dominion is about Devlynn St. Paul, a young woman who made a deal with the Devil to stop her brother. Now, she’s out in the world going place to place and stopping other Demons while now being something of a Demon herself. We don’t get to see (yet) the backstory involving said deal and her brother but we know what the what is thanks in part to summaries and the like. Though I’m really curious to see how she managed to renege on her deal with ol’ Lucy and get control of things in order to function like she’s able too. Something I hope we get to see at some point in this 5 issue series. And given this is a five issue series, that makes me wonder about Devlynn’s fate at the end of it. Or if this is merely an intentional decision made by the Blackbox crew to see how well the book does by the end of its run and then go from there. I like that instead of wallowing and being a misery, Devlynn’s out there in the world and not letting her lot in life keep her miserable.

And instead, using it to help out here and there. Even if it probably is something ol’ Lucy isn’t too enthused about. I’m also reminded of the Constantine film from a few years back and I’m curious if that film had any influence on this book’s creation. Something to ask Brian about perhaps at some point! Another thing I’m curious on if is the normals in this universe can see the Demonic forms we readers can. Or if its only the Human forms they see unless Devlynn or another intentionally shows said Demonic form? Which I guess would explain why a few individuals aren’t more terrified than what they already are. I’m also gonna say that I like the fact that Devlynn isn’t another white lead as there’s plenty of those out there in the world and I’m looking forward to seeing her kick more ass in the next 4 issues. I’m also eager as Hell (no Pun intended) to find out who the newcomer is at the end of this first issue!

Is it one of the Horsemen? Or is it one of Lucy’s? Either way, the wait for issue 2 is gonna be a long but eager wait! Looking forward to seeing more of Raffaele Forte, Sara Ianiello, Carolina Pontes, Moose Baumann, and Justin Birch in these issues alongside Brian!

Devil’s Dominion #1 will be released on December 30th, 2020, so be there! Or be chased by a Demonic figure! And be sure to keep in mind the Diamond Code OCT201263 when you visit your local comic shop! Along with ordering direct from Blackbox!

Summary: Devlynn St. Paul sold her soul to the Devil to stop the horror being done to her by her brother. However, Devlynn reneged on the deal and now uses her demonic powers to hunt others who are demon possessed and have lost control of their lives.