Mad Cave’s very own Editor-in-Chief, Chris Sanchez, will be overseeing every Maverick title and working closely with the editorial staff as well as the creatives behind each title. Sanchez spoke of the endeavor:

“For over a year, I have been working with an incredible group of creators making books that are brimming with passion, creativity, and love for the human experience. I am so thankful to be given the opportunity to create a space in comics that I wish I had growing up. My hope is that Maverick becomes a place where readers can find stories that mirror their own and understand that they’re not alone in their struggles.” 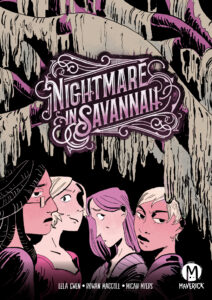 Moving back to Savannah was not a part of Alexa Bowman’s plan, but when her parents are sent to jail and all she has left is a spare room in her grandpa’s house, she takes it.

While her new school, Summerland High, is a far cry from Chicago, the students are exactly the same. From tormenting evil cheerleaders to dreamy football players, Alexa can’t keep up. That is until Fae, Skye, and Chloe invite Alexa into their group of outsiders. Everything seems great, until the morning after a night of drinking when the girls discover that they might not be entirely human. Soon they realize that they have an ancient fay power flowing through their veins.

A power that gives the girls license to fight back against their bullies, but what happens when a trick goes too far and leaves the group scrambling to recover on the eve of Homecoming night?

“I’m so excited to share this book with the world. A little bit scary, a little bit romantic, alotta bit queer,” said Lela Gwenn. “This is my favorite kind of story and I’m so happy Maverick is here to give it to y’all!”

“Mad Cave Studios really took a chance on me to help them bring this story to life,” said Rowan MacColl. “It’s been such a fun experience working on a project like this. I’m so excited for everyone to see our work and help bring comics to the YA genre!” 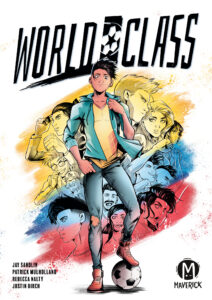 Football is a religion where Adrian “The Colombian Cannon” Molina comes from, and thanks to his wicked right leg he has a clear shot at the promised land of the European Junior Leagues. But when a football scout offers him a full scholarship to an elite prep school in London, the news seems too good to be true. His enrollment hits a snag upon meeting the team’s star striker, Titan Evans. Titan is everything Adrian is not — rich, powerful, and connected. Most of all, Titan possesses a hunger to dominate the pitch no matter who or what stands in his way. The constant fighting, teasing, and bullying intensifies Adrian’s crippling anxiety as he is constantly concerned for his spot on the team.

All of that changes the day Luciano DeSilva, the team’s star midfielder, takes him under his wing and gives Adrian the confidence to be himself and value not only his position on the team but in the world.

“Mad Cave Studios changed my life when they hired me in 2018.” said writer Jay Sandlin. “From the beginning, it was clear they support their creative teams in telling their stories through the eternal format of comic books. I’m certain Maverick will be another tool to reach young readers so they may find their favorite stories early to carry through adulthood and later pass to their kids. Thus continuing the circle of (comics) life!”

“I think it is great to give young readers easy access to fun and complete stories,” said artist Patrick Mullholland. “Kids love to read and have new experiences, they’re the next generation of comic book readers. Maverick will help young readers discover new genres in comics, and I think that’s great!” 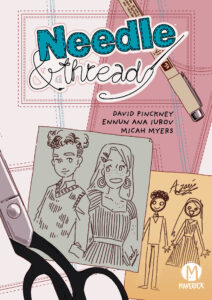 Choosing between living the life you want and living the life your “supposed to” is not always an easy choice. Noah, embracing his truest-self, wants to pursue a career in costume design, something his loving, but traditional, parents would never approve of. Azarie, the perfect, model daughter of a very stern, political family, dreams of embracing the hobbies she secretly loves, hobbies her social circle would never abide by. The two live different lives and their social statuses keep them from ever crossing paths until they have a chance encounter that exposes some common ground: the desire to live the life they’ve chosen for themselves.

Together, the two set out to put it all on the line and show everyone who they really are and what they want to achieve through the unlikely medium of cosplay. Their friendship will be tested and their faith in themselves and each other will be tried, but by staying true to themselves they discover that they truly need each other.

“The comic at its core, to me, is about finding yourself and being yourself in the face of trends and expectations,” said writer David Pickney. “These kinds of stories tend to be able to go in so many different ways and can mean so many different things that it was actually kind of daunting at first when Mad Cave came to me with the idea. They were great and really helped drive home the point of the story and really gave it some focus throughout the process of creating the comic. The Maverick line of comics, I think, will be an exciting jumping on point for readers who are new to not just Mad Cave, but new to comics as well.”

“Working on Needle and Thread has been my introduction into the IRL comic book world and getting to experience that first step with Mad Cave and the rest of the team has made it a truly beautiful and greatly enjoyable experience,” said artist Ennun Ana Lurov. “I only hope that the readers will feel as excited to get to read our little project.” 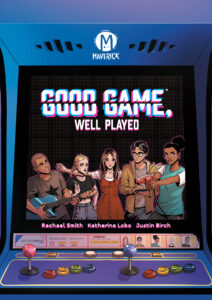 It’s 2005, and Sienna is really not looking forward to flying back into her hometown to say goodbye to one of the people she called family. Though that feels like a lifetime ago.

It’s 1999. And Sienna is looking forward to what is shaping up to be the Perfect Summer in her Perfect Life. She has a job working in the local video game store, Game Champ, with her four best friends, and that’s how it was going to be forever… At least that’s what they thought, until Jason Silver, the money-hungry landlord threatened to shut down the store. Now, the kids must work together to save Game Champ, but with Art’s huge crush on Sienna, Jo’s crippling self-doubt, Sid’s obsession with his band, and Hope’s mysterious living situation getting in the way… how likely are they to succeed?

“Good Game, Well Played is, primarily, a story about five friends, and I was determined that Real Friendships should be involved in the making of it,” said Rachel Smith. “Once a first draft was finished I threw a dinner party for ten of my dearest friends and got them to act out the script. Hearing the dialogue come to life in front of me like that was incredibly useful to see if those all important friendships seemed real. That dinner party is responsible for a lot of the heart in this book.”

“We are doing a beautiful book together!” said artist Katherine Lobo. “I’m in love with the characters, this book is a little heartbreaking but always funny, I can’t wait for you to see it completed!” 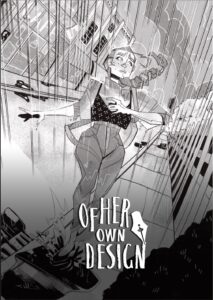 Of Her Own Design

In the small town of Holden, sixteen-year-old Brie Page has been struggling with a tremendous bout of writer’s block. And that’s a problem. One of many she has, actually. Parents that constantly fight, her former best friend/current bully Viv Kinsley, and the gorgeous new girl Kay Ardiger are causing a bit of stress. Brie used to hide from it all by creating her own fictional worlds and stories, but all of that seems so far away now.

All of that changes when an unexpected encounter with a mischievous bookseller, Ambrose Chance, leaves Brie with a magical pen. One that breaks through her writer’s block and causes her stories to flow onto the page… Too bad the whole town of Holden had to get caught up in it too when her stories come to life. Now, when the most important people in her life are stuck in fantastical tales, Brie needs to save them by diving into her worlds and facing her worries head-on. Which would be fine… if only she was better at writing endings.

“I’m so excited to have people read Of Her Own Design!” said writer Birdie Willis. “Pretty aptly, Brie took on a life of her own as I wrote her. She’s full of wit and awkward charm – definitely one of the most fun I’ve had writing a character in a long time! I can’t say good enough things about Mad Cave! They really gave us the room for this story to grow at its own pace – and it’s not every day you get an opportunity like that!”

“Birdie’s script is nothing short of magical, and I can’t wait for people to share in the story,” said artist Jess Taylor. “Giving life to Brie – her struggles and successes – has been amazing. There’s a really relatable depth to her and her passions. I’ve been her. I hope other people can find the same comfort and inspiration in her story as I have. Mad Cave has been wonderful! They gave this story the chance to flourish. They’ve really bolstered and supported us every step of the way.” 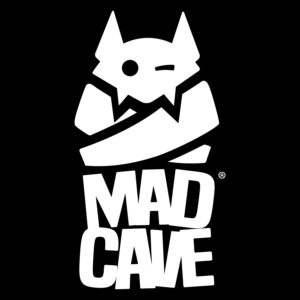 We hope that Maverick will be home for stories that break past traditional conventions and evolve along with our audience. To learn more about all these awesome titles, you won’t want to miss the Mad Cave Showcase 2.0 on October 3, at 12pm ET! www.maverickcomics.com Twitter @Maverick_OGN Instagram maverick_OGN