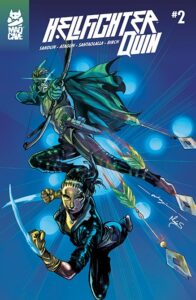 HellFighter Quin is a very unique comic book story. As I mentioned in my review of the very first issue, “The story of HellFighter Quin is like a combination of Mortal Kombat meets The Infinity War”. In this action packed second issue, we waste no time in getting right back into the adventure. Harlem’s favorite hero, HellFighter is in the middle of a battle as he is suddenly joined by two mysterious new allies. We find out their names are Deadeye and Glass Assassin. However, where they came from and what their intentions are still remain unknown.

Enter The Reigning Invictus, so powerful that all three heroes combined are still no match for his incredible strength. The new team is already caught in a life threatening fight seconds after forming. How can they survive? What will be the fate of this new group of fighters for justice? As HellFighter Quin, Deadeye, and the Glass Assassin escape one problem only to find themselves in bigger problems, the outcome of this war will affect more than just the people of Earth.

Stakes are raised to an all-new intense level. The first two issues of this series is only the beginning of this story and the Inter-Dimensional war taking place within these pages. You will not believe what happens to these three heroes in this second book. I need to read part three to see what is next. Everything is getting extreme and something huge is going down. The Queen has made her presence felt, and now there is no going back. HellFighter Quin is all in, failure is not an option, he must be successful, because it’s no longer just about Harlem.

Summary: After surviving the first round of the Tribunal, Hellfighter must brave the Labyrinth in order to make it to the next stage of the tournament. However, he’s in way over his head and is aided through the trial by two new companions, Glass Assassin and Deadeye. Will they make it to the end or will a new mystical foe stop them from reaching their goals? 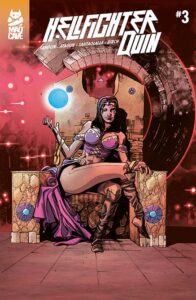 Summary: The origins of the Doomseer are revealed. Hellfighter is presented with his most difficult challenge yet as he faces off against Cyber Horizon’s champion, Maimframe, while Shard stands toe to toe in a battle against the cocky Invictus. The winners move on to the final stage of the tournament. Will our heroes succeed or be swallowed whole by the more seasoned veterans?

Entering a new world for the third time, HellFighter Quin finds himself in some form of “cybernetic” universe, where he doesn’t even get a chance to take a tour. Waiting for him the second he landed was a monstrous robotic figure that went by the name of “Maim Frame”. This technologically advanced warrior is the deadliest of Quin’s opponents to date. With the ability to calculate victories based on math statistics and computer simulations, Maim Frame had a plan to be done with this match in less than 30 seconds.

At the same time, both Glass Assassin and Deadeye are in battles of their own in different dimensions. Unfortunately, we only get to see the fight between Glass Assassin or Shard, as she now likes to be called, against Invictus. This seems like an obvious miss match, but we hope that Shard’s training will help her to discover how to use her new powers effectively.

This third installment of HellFighter Quin is jam packed with exciting matchups and new worlds to discover. The Queen makes a major proposal to Quin, and the end of this book will leave you with a nice twisting cliffhanger. I think this series deserves its own animated series. I can see toys easily selling out, and I would love to also own a cool T-shirt. HellFighter Quin #4 is coming soon, and you better be ready for it.