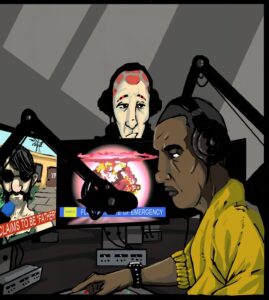 We are pleased to announce that “Life Under Kaiju” has launched its first issue on Kickstarter. This ongoing series takes place in a world that is being invaded by giant monsters, from the seas. No Ultraman, no friendly Godzilla-like Kaiju to stick up for humanity, just the feeling of sheer, hopeless defeat.

Brought to you by the creative team of Johnny Craft (writer), Edgardo Granel-Ruiz (artists), and D.C. Hopkins (letters). The first issue follows Derek, a popular morning radio shock-jock, and his attempts to flee New York City from a Kaiju attack. We also see the beginnings of Derek’s transformation from an undeniable garbage person, to attempting to finally be a good person.

“I based Derek on, like, four different radio shock-jocks I would listen to growing up,” says writer Johnny Craft. “None of them would be what anyone would consider a ‘good person’. Shock-jock radio was always misogynistic, homophobic, and borderline racist. My goal with Derek was to take the type of person that I would not like, and put them through the ringer, to transform them into someone I would actually admire. His character development is key and it doesn’t stop at the end of the first issue.”

The monsters were designed by Edgardo Granel-Ruiz, who was given free reign to come up with the most insane looking Kaiju that he could. Each Kaiju is unique and each one is as scary as the last. Granel-Ruiz has been constantly referred to as “The Monster Maker” by Craft, but his artistic skills don’t just stop at Kaiju design. “Edgardo is amazing,” says Craft. “I hired him after seeing an incredible Cthulhu piece that he made. It became pretty clear, pretty quickly, that he wasn’t just a guy who made dope-ass monsters. He was constantly turning in pages that would give me the creeps, and make me feel claustrophobic, without even having a Kaiju in a single panel. Edgardo Granel-Ruiz was, by far, the perfect partner I could have chosen for this project. He is amazing to work with.”

Life Under Kaiju is a horror story, as well as a comedy. It combines a unique post-apocalyptic scenario, with a great cast of characters. This series has limitless potential and promises to keep the reader coming back for more. Issue One is now on Kickstarter, with a small goal of only $900.

“I kept COVID concerns and USPS issues in mind, when launching this campaign,” says Craft. “I put a heavy focus on digital rewards that are incredibly unique and entertaining. Derek is a shock-jock, so I produced a full episode of his radio show. I also did a commentary track, that should be boring, but if I’m being honest, it’s pretty damn funny. We still have plenty of physical rewards, but I don’t think I’ve come across a comic book Kickstarter that made its own radio show tie-in.” 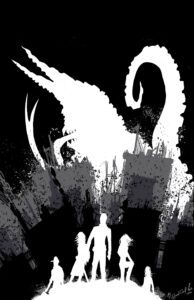 Life Under Kaiju #1 runs on Kickstarter until Saturday, October 17th and promises to deliver more than just a comic book experience. Become a backer now and prepare for hours worth of entertainment.