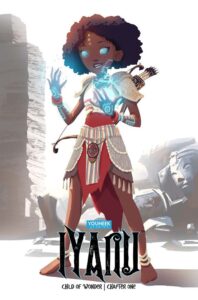 IYANU #1 was a real treat to read, a great first introduction to the character of Iyanu and not only the world she inhabits but the world others of a different class inhabit as well as the setup for how these two are headed for an eventual and inevitable clash. Iyanu is a “forest girl,” a negative term thrown at her by those of the city of which she lives around but not in. She lives in the forest with her mentor Olori, the last of the Agoni – keepers of the true history of Yorubaland.

The first issue focuses quite heavily on the establishment of a sort of caste system within Yorubaland, beginning with the powerful and corrupt calling for the extermination of those they perceive as corrupt, all the way down to the hidden impoverished areas of the outer walls of Yorubaland of which is hidden only to those born of the privileges not to see it. And then finally the Olori and Iyanu, the lowest of the low within this system. Even unable to step a single foot within the city without being forced to leave.

It’s a lot to get in, but Roye Okupe and his team do a phenomenal job at setting the pieces up by focusing primarily on two figures throughout the book: Iyanu, who has the perspective of life outside the wall, and Uwa, a council member of the leaders of Yorubaland, who advocates for the downtrodden and impoverished. Who wants to see Yorubaland grow beyond its walls but is met with extreme vitriol from many of the other council members. 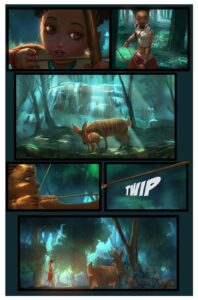 On top of all of this however is a plan to get rid of Olori by the council – perhaps to put to rest the history of Yorubaland so that those in power may forge ahead with their own history making decisions – as well as the growing powers of Iyanu, which remain a mystery both to the reader and to her but as we can see in this issue at least allows her to see the long history of the YouNeek-Verse as we get glimpses of the other different comic series by this same company. 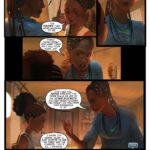 A lot of this comic is atmosphere as well, with a good portion of the first half of the book mostly silent giving over the reigns of the story to Akpan’s gorgeous painted style art. The forest is filled with such beautiful animals and luscious greens, and just through their portrayals of Iyanu and Olori’s eyes you can tell exactly what the character is thinking making the quite moments fill that much more meaningful.

The lettering by Spoof Comics, when they do show up, are sometimes a bit hard to follow but some of that has to do with the amount of text a character may have for dialogue and where the panel for that character speaking may lie. But more often than not everything is rather simple and easy to follow so there isn’t much to complain about here.

One more aspect I really enjoyed was Okupe and Spoof’s inclusion of the actual Yoruban language within the book. And I only know that thanks to the translation notes at the end of every panel when its used. It adds an incredible layer of authenticity to the characters and the world in which they inhabit. Sure most of the book is written out in English for sake of ease, but there are whole bits of dialogue written entirely in the language as well and it feels only natural to the characters as they’re speaking. 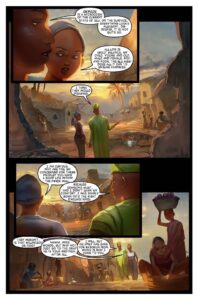 YouNeek Studios, if you haven’t heard of them, is all about telling African stories with an incredibly rich interconnected universe that the company has already built and of which Iyanu is only a small part of. Their stuff looks absolutely great, from Malika to E.X.O., and I’m excited to check out more. This is only the beginning.

Summary: It has been over a thousand years since the age of wonders — a time where the divine ones blessed humanity with spiritual, structural and technological marvels. But in the blink of an eye, it all vanished, and all that was left were remnants of an ancient, advanced civilization. As humankind forges ahead, culture becomes knowledge, knowledge becomes history and history becomes mythology. Until Iyanu. A teenage orphan girl with no recollection of her past who suddenly discovers that she has hidden powers that rival the divine ones themselves. As Iyanu tries to come to terms with her new abilities, the people of Yorubaland become aware of an ancient evil that has reawakened. And all that is left between them and destruction are the memories locked away in the mind of Iyanu.