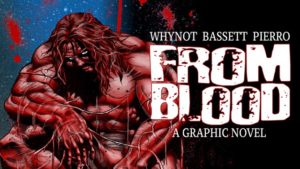 In the center of this somewhat cliché tale of loss, vengeance, regaining some of what you lost, and even gaining something new in the process is Patient 27. Or rather, Tim. A big ol’ burly fella whom you do not want pissed off at you unless you want to end up in a hospital bed for awhile. Well… If you’re lucky anyways that is. I remember hearing of Cosmic Times’ ‘From Blood’ title about 5 to 6 years ago but never had a chance to read it for one reason or another until I was reached out too about doing a little R and R on the book. ‘From Blood‘ is also currently now on Kickstarter as of October 18th with a goal of 3,500 dollars. The book’s also been re-done color wise (with Victorino Mendoza Muyo JR. as the colorist!) as originally it was done in black and white.

I’ve gotta say, the actions of some of the staff at the Grove Mental Institution (Where we meet ol’ Tim 27) and their actions is just a malpractice suit waiting to happen. Along with getting their licences revoked for their terrible handling of things where Tim’s concerned and perhaps just ending up in prison altogether. If you’ve read ‘From Blood‘ before, you know what I’m talking about and if you haven’t yet, well, time to do a little reading! I have to say, Dr. Reese should be nominated for Sainthood considering she doesn’t run away from Tim 27 due to how violent he gets for one reason or another. Though personally I wouldn’t have minded if she somehow directed him to her ex-husband for a ‘talk’ where a certain dog is concerned.

One thing about ‘From Blood‘ is that it can serve as a cautionary tale in why you shouldn’t be distracted when dealing with experimental drugs that could save a person’s life. As it could lead to some bad things otherwise and potentially take a long while to fully deal with. Its great to see Tim’s journey of redemption and reclaiming what he once was as this story goes on. Even if as I mentioned before that its somewhat cliché, especially where him and a certain but lovely Dr. Reese is concerned. I’m curious to see Zach Bassett and James Whynot intend to continue ‘From Blood‘ after the events of this story comes to a close. And if so, what other problems Tim may end up having to deal with in his struggle to become normal once more.

‘From Blood‘ is currently at 965 dollars of its intended goal with 27 days to go and with your help, hitting its goal will surely be a success!

Summary: Patient 27 has been locked away at the Grove Mental Institution for years. No one knows his real name … no one knows what secrets he’s forgotten about. The only thing the staff knows is that he is an invincible monster to be avoided at all costs. After Patient 27 lashes out in a violent rage, Doctor Reese a new psychologist has a break through … then all hell breaks loose.

Together, Patient 27 and Doctor Reese begin a quest to unlock the secrets of the past and to understand why he seems to be indestructible. It’s a race across the country as they try to stay one step ahead of the men looking to turn 27 into a weapon, but can 27 ever be more? It’s an action packed voyage of discovery that you won’t want to put down.