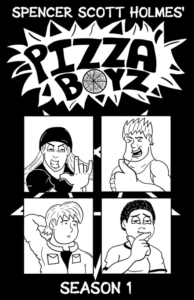 So sometime ago I received a copy of Pizza Boys: Season 1 from Spencer Scott Holmes himself and ended up taking awhile to get around to reading it. Something I tend to end up kicking myself for doing and Pizza Boys was no different in that regard after I finally sat down and read through the book. I love that this isn’t about Super Heroics, insane drama, outer space happenings, and the like but instead, something akin to everyday life. Especially as it involves a group of friends who definitely enjoy themselves some Pizza! Which you can never go wrong with there! Though I will say that Kyle’s seemingly strong preference for Alcohol over anything else to drink isn’t exactly healthy and that his apparent enthusiasm for rape scenes is worrisome.

I love the very clear nods to the 90’s in this title and it makes me want to get a Nintendo 64 for some good ol’ nostalgic fun. Though I’m curious if whether or not Mario Kart really is a game changer when it comes to dates. Pizza Boys is also done in black and white and while the art is unlikely to win any awards, it does a good job in showing the boys (and a few others) and all the stuff they get into. Such as getting everyone together for various things like pizza, arcade fun, jobs, and movie making. All of which tend to be a little zany and fun to read. Making me wish I had had friends like that myself growing up and around now as well.

And to be clear, I’m not bashing on Spencer’s art in any way. Its clear this is a labor of love and he’s choosing to express that in his own unique way. Something I definitely have no problem with!

That Vince wants nothing to do with one particular girl shows he’s definitely a smart man. Of course, given how she treated him and all, he’d have to be insane to want anything to do with her. Makes me curious if they’ll cross paths again in the future. All in all, I’m glad I finally read the first season of Pizza Boys, even if there is a word in here I don’t particularly care much for, along with Kyle’s enthusiasm for rape scenes.

Definitely gotta get ahold of the next part of this zany world of Spencer’s and if you haven’t done so yet yourself, you should too!

Summary: Ever wanted to read a comic that had the thrills of a workout, with the laughs of a podcast and the nostalgia of an N64?.. Probably never crossed your mind till now.

Well in Pizza Boyz, the sit-com styled comic goes into the fray of what is best in life. Creating martial arts movies with friends, finding the easy street way of making money till your podcast takes off, being cautious of “THAT GUY” at the gym and utilizing the secret powers that Mario Kart holds.

And of course, grabbing a slice of some good times pizza. So, come on by and hang out with the ole gang. It’s just like you remember, only black and white.