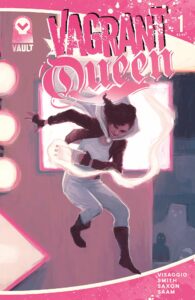 So awhile after I downloaded this thanks to a special offering Vault did awhile back, I finally got around to reading it tonight. And as the case tends to be, I find myself wishing I had done so much sooner as I really enjoyed this first issue of Vagrant Queen. Its set in outer space with its own little thing that leaves you wondering how this and that came to be. Though there’s not much in the way of original lingo as you might find in an outer space title. Whether or not Magdalene Visaggio intended that or it just happened on its own is probably best to just ask her but I will admit that finally reading something (as far as I know) of her’s was a nice thing to do for me. Vagrant Queen also has a kind of Star Wars vibe to it and our main gal (Elida) could be considered Han Solo or Princess Leia to a degree thanks to the Royal lineage.

Now the reasons her mother and the Kingdom was over thrown aren’t revealed (natural of course since this is a first issue and all and I really need to go and get my hands on the first volume) and I’m wondering if they were the bad guys or if they were actually the good guys and just got really screwed over in some way. I like that Magdalene leaves that in the air for readers to think on until its (granted I could be wrong) revealed. Though given that one character seems to want to help Elida find her mother makes me think that maybe Elida’s Kingdom wasn’t a bad one. And I love that Elida isn’t some shrieking violet who needs someone to protect her. That she can kick ass and not blink and then go for a drink to unwind after.

Its seriously great. The history between her and Isaac (the one I mentioned earlier wanting to help her find her mother) is one I’d like to see be explored in a flashback (if it hasn’t been done already) as it’d be fun to see the event that keeps getting mentioned. How that’ll effect things, along with a more recent development is something I can’t wait to see more of when I get a chance to do so as I imagine its gonna be great to read. I love Jason Smith’s work here just as much as I do Harry Saxon and Zakk Saam’s. Especially when blue speech bubbles are used and the dialogue isn’t hard at all to see.

That Vagrant Queen is getting adapted for the small screen on SyFy as a live action series with Adriyan Rae as the lead is freaking awesome and I can’t wait to see how that turns out! Darn long waiting periods! Come on 2020! And is it just me, or is the guy chasing after Elida and Isaac reminding anyone else of Napolean from Bill and Ted?

Summary: Former child queen Elida was driven from her throne at age ten and forced to wander the galaxy, evading the revolutionary forces that wanted her dead. When an old frenemy claims to know the whereabouts of Elida’s long-lost mother, she is forced to return to her former kingdom and stage a rescue.