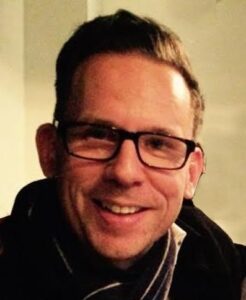 1. Hello there, and welcome to the Mind Meld here at IndieComiX! For those who may not be familiar with you and your work, could you tell us a bit about yourself?

Hey 👋 I write and draw Death Sentence: Liberty and Frenemies, as well scripts for Marvel and others.

2. You’ve currently got a Kickstarter going for your series titled ‘Death Sentence: Liberty‘, what can you tell us about that?

It’s about an STD that kills you in six months but gives you extranormal powers. What would you do? It’s live for four more days, 300% funded with lots of stretch goals. 4 issues in total.

3. What inspired you to create ‘Death Sentence: Liberty’? As using something like an STD to have super powers develop is a very unique idea.

It was actually when I was about to become a dad, it felt like we only had six months to do creative things like make a comic before our lives changed forever. So I made a comic, Death Sentence: Liberty, with the artist Mike Dowling (Marvel, DC) Luckily people loved it.

4. How’s the reaction to the series been so far?

Humbling. It was called “The Best British Comic in Years” by Buzzfeed, “a masterwork…like only the best bits of Watchmen” by Popmatters, “Brilliant. Genuinely original” by Mark Millar and “sexy, funny, dark and mature…a striking new voice in the superhero genre” by Comic Book Resources. So we were very lucky. 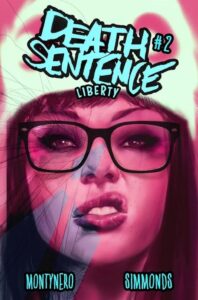 5. Heh, very cool! Why use something like an STD as a way to gain powers? A topic like that does tend to be a little touchy for some as well.

It gives you a choice whether to catch it or not. If it’s just a random virus it’s less dramatic. Good drama is all about the characters driving the story, dealing with tough situations, not things that just happen to them. 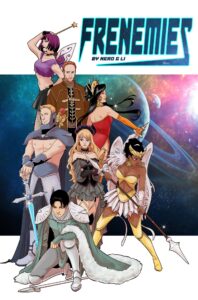 6. ‘Death Sentence: Liberty‘ will only be six issues in total, correct?

7. Has using Kickstarter to fund its creation been extremely helpful rather then a hindrance?

I love Kickstarter. You can talk direct to your readers, give them extra cool stuff. It’s a different market to comic shops, which I also love. Crowdfunding is the future, no doubt, but I still buy from comic shops too.

8. Hecks yeah on the comic shops! Why go for a six issue run rather then a longer one?

People like stories with a beginning middle and end. And we can get top artists to commit and get all the issues published and sent out so people aren’t waiting around. 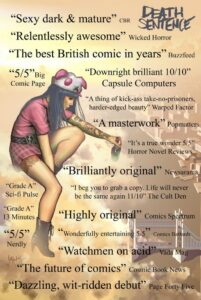 9. Right, that actually makes a lot of sense. Do you plan to do more with the world of Death Sentence after the initial six issue run or is six issues it?

Yeah, there’s another story focused on Verity queued up next. More personal. Wilder.

10. Sounds awesome! As for my final question, what advice would you give to those looking to get into comics creation or are just starting?

You need to be making your own comics for fun first. Short Stories are good. Find collaborators of like mind. You can put stories up online now and see what people think, get a feel for what works and what doesn’t, the whole process of creation. Stay humble and always be learning, no matter how successful you become.

Editor’s Note: While the Death Sentence: Liberty Kickstarter has reached its funding goal of 3,082 dollars by hitting up to 9,647 dollars and four days left to go, every bit of extra pledging never hurts! Especially if you’re wanting to check out Death Sentence: Liberty for yourself! It should also be noted that the Kickstarter is about to hit the mark on reaching its 5th tier stretch reward goal!