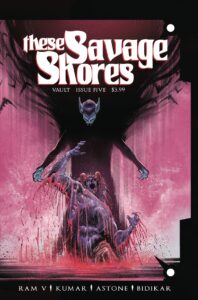 Okay, I’m gonna say it right here, right now. This final issue of These Savage Shores has effectively blown away EVERY expectation I had been having ever since the end of the fourth issue. Because, you see, here I was, for months, thinking that after the ending of the 4th issue that some serious s**t was about to go down. Blood would spill everywhere, bodies would be in a number of places and in pieces, and a certain Vampire would be in extremely heavy regret as Bishan beat the Unholy Hell out of him after turning Kori. But what ol’ Ram V did was the complete opposite of that in a number of ways and you know what? That is fine. That is absolutely, 100 percent fine! Because I loved what we got in the pages of this final issue! Hell, I was even a little worried about Kori after the events of the previous issue and what was shown here made me less worried thankfully.

Though how she handles things as the years go by remains to be seen however and that still has some worry for me. I love that she isn’t super accepting of her new situation or even spending a lot of time being bitter about it. Though something like that was probably (but is talked a little about) done off panel for all I know. And I most certainly wouldn’t be opposed to seeing a one-shot or something that shows how she’s doing some years after this final issue. There’s just a lot of potential with that where not only she’s concerned, but Bishan himself. Hell, getting to explore his very early days would be a treat too as well! But only time will tell if Ram does do something like any of that. Though if he does, I hope he brings Sumit Kumar, Vittorio Astone, and Aditya Bidikar along for the ride!

I still greatly love how everything continues to interweave together with the characters and events of the time period. Its just fantastic writing and probably a nice way to get one interested in checking out some History. And while things didn’t necessarily go the way I expected them to go, especially in the beginning, a certain fight I’d been looking forward to does happen. And damn is it as good and savage as I expected it to be! I’m curious if the way a certain scene goes during the big fight if there’ll be any potential effects on Bishan later on down the line. The chat before the big fight was pretty interesting to witness as well. Not to mention isn’t something you see that often and the fact neither was necessarily rude during the whole thing was pretty great.

Ram V did a superb job from start to finish with These Savage Shores and I am damned fortunate to have been able to experience this story. Especially as it was coming out rather then later on down the line. And with that said, when this issue comes out next month on the 9th, the one thing you shouldn’t do is miss it! Or you’ll definitely be sorry as this is meant to be read by as many as possible! Looking forward to whatever you do next, Ram!

Summary: In the aftermath of war, victories and defeats are counted. But there are things lost that can never be regained. And so, a monster now travels to a civilized land for a final confrontation. A clash of ideologies that will leave in its wake a devastation of the soul. Along These Savage Shores from whence the monsters came to a world full of good men.