Get ready folks, because Tony Cooper is getting ready to unleash the next part of his ‘Powerless’ novel series! 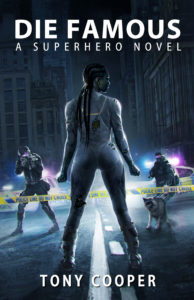 Strapline:
A superhero novel about finding out where you belong in an unfamiliar world.

Short description:
Ruth doesn’t want to be famous, she just wants to be seen and accepted for who she is, so she defies her father and auditions for a Hero talent show. However, when a team of villains from the 1970s wake themselves up in the present day, Martin and Hayley stumble upon their plot and end up risking their lives to save the villain’s ultimate target: the TV show’s contestants.

Long description:
Deep under Element City, a villain team from the 1970s called ‘Havoc’ are unfrozen and begin to plan their reemergence into a confusing new world. Meanwhile, as Martin and Hayley continue their vigilante teamwork, they uncover evidence of a team of powered individuals who are much younger than they should be. At the same time, Ruth, a powered Nigerian immigrant, defies her father to apply for a talent show aiming to create a new superhero team.

As Havoc begin to create chaos in the city, Martin and Hayley clash over how to deal with them and Ruth and the talent show become targets for a resurrected group of villains determined to die famous.

About the book
DIE FAMOUS is the third book in the “Powerless” superhero novel series from Tony Cooper. He launched a successful Kickstarter pre-order campaign (https://www.kickstarter.com/projects/tonycooper/die-famous-a-superhero-novel), which saw 30 backers receive ebook and paperback copies before anyone else. The official launch of the book will be at MCM Birmingham on the 16th-17th November 2019, where he will be at table CV43 in the Comic Village.

About the series
The books are set in an alternate version of the UK, where people with extraordinary powers (called Heroes) have been known about since the turn of the 20th century. In the present day, they are tested for at birth, registered and monitored for life, and seen as threats to society. Element City is the safest place for them to live, as it is more tolerant of Heroes given its history, having been founded by the first known Hero, The Elemental.

In the city, Martin Molloy, an old 90s Hero, had gone into hiding to avoid registering. However, he was brought out of retirement when an old teammate was murdered by someone with powers. Now he is working with Hayley, a police constable, but also a Hero who is hiding her own abilities from everyone she knows, to combat crime and fight Heroes turned bad.

About Tony Cooper
Tony Cooper lives in England and writes novels, comics and videogames while drinking tea. He studied medicine at university before deciding to making video games for the next sixteen years instead. He has just finished Die Famous, his third superhero novel, (“Powerless” and “Killing Gods” being the first two books) but has also released “The Murder Club”, a pair of graphic novels about psychopathic teenage killers, “Powerless: Some Kind of Hero”, a tie-in comic book to his superhero novel series, “Higgs & Soap: Galaxy Delivery”, a daft sci-fi caper, and “The Resurrrection Tree and other stories”, a collection of dark short stories.