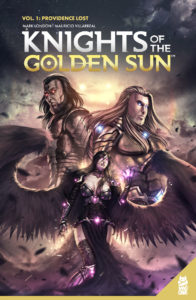 Somewhere along the way on the Road of Life, I got a bit lost when it came to Mad Cave Studios/Mark London’s Knights Of The Golden Sun. Mostly on account of forgetting where I had left off in the series but thankfully, that problem has been resolved. Its a lesson well learned in keeping better track of certain things! And all thanks to all seven issues of the first part of the story being collected in this lovely first volume. A Hell of a volume at that, even if I did have to start over several times thanks to low memory issues but that’s not important. In KOTGS, God’s pulled a vanishing act without a word to just about everybody in Creation, which has seriously caused a problem or two!

Angels don’t know what to do, Humanity’s coming under fire thanks to the Fallen and other threats taken advantage of God’s absence. Its a real humdinger of unfortunate Biblical proportions! But rest assured, the House of David, Gabrielle, Michael, Raphael, and Uriel have it all under control! Well… Kinda sorta anyway! Ol’ Mark has definitely put a lot of thought into this story and I for one love that. And as we learn certain things, one (me at least) has to wonder if God knew what would happen after a certain chat with Azrael? If so, it further makes one wonder why he would allow it to happen when he could just find a different way that would mean a much different outcome for Azrael.

Who, by the way, I’d let control me any day! I’m also loving the fact (even though its probably screwed up of me) that the Fall of Lucifer and those who aligned with him were the cause of the extinction of Dinosaurs. I thought it was a great way to tie that into this version of events Mark’s writing out for us and Mauricio Villareal’s arting it up for us on. His art (and I’m assuming colors) are absolutely perfect for this book and I hope he’s around for the next part of KOTGS’ grand and Biblical story! Though… I have to wonder how the consumation of the wedding night between Lucifer and a certain Giantess would have gone? As I imagine it would probably be a little awkward considering the clear differences in height! Yes, I know, weird of me to wonder about that but can’t be helped!

I’m also loving how its the House of David that helps the Archangels out on what it is they need to do, along with how certain things God’s done in the past also ties into their mission. Another example of Mark’s dedication in doing this story in my view! And while we learn a number of things through out this first part of the story, we’re also left with a question or two. Like whether or not God knew how things would turn out with Azrael? Is Uriel’s powers somehow tied to only working when Lucifer’s about? Or is there more to it then that? Just how long of a walk is Uriel gonna have!? And what other surprises does Mark have in store for us!? Cause they are bound to be doozies for sure!

Especially when Lucifer and his bunch start raisin’ a ruckus now that he’s brought the band back together so to speak! Its gonna be a long wait until 2020 to see the fate of Humanity and Providence unfold but hopefully the wait’s one that can be handled! If you’re sleeping on anything Mad Cave, or have just been looking for a good time and place to read Knights Of The Golden Sun, this volume is the perfect place for your beginning needs! KOTGS Volume 1 hits store July 24th! So make sure to have some extra money in your wallets for this one, folks!

Summary: Knights of the Golden Sun is a biblical epic set during a time of great turmoil. Four Hundred years separate the Old Testament from the New Testament during which neither man nor angel could hear God’s divine message. In His absence, a power struggle erupted among the Archangels and the Fallen over who will control Father’s throne. Providence, the Angels, and humanity would never be the same…