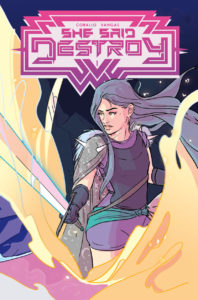 She Said Destroy is an ambitious new take on the Celtic Gods of old. Re-introducing the modern world to the likes of The Morrigan, Brigid, and the knowledge of all those of whom they once shared the planet with. When I mention Celtic Gods you may be imagining nomadic tribes clad in medieval armor, with swords and sorcery abounding. However, only a little bit of that is true.

There are swords, there is sorcery, however everything else you may be imagining is completely off the mark. This world is set in a future where these Gods are not only very real, and very tangible, but they travel in spaceships and live in forest alters that are hidden deep within the cosmos. With an incredibly original blending of fantasy and science fiction, the team of She Said Destroy have crafted a universe that is visually stunning and feels like nothing else that’s come before.

It’s a rare treat in comics these days.

Joe’s writing hits its mark in setting up this fascinating new world, giving you a short crash course into the history of how we got here, without bombarding you with too much information and showing you a ton of unnecessary imagery. Where some creators would’ve shown you a full flashback sequence in the opening pages that explained everything to you, Joe and Liana decide to hold back and instead push forward with where we’re at now. Keeping the story focused and linear.

In this issue we meet not only the last two remaining Gods, but the guide of which we are brought into this world and will follow: Winona. A follower of The Morrigan and main character, who seems destined to become a great warrior in the coming battle against Brigid. It’ll be interesting to see her arc and if her faith is tested at all in the coming issues.

However, though Joe doesn’t bombard you with a ton of information in building out the world and it’s history, there are a few times when a bit of explaining would have been nice. There are certain occasions when things sort of just happen and it’s obviously a regular part of these people’s lives, but because this is a whole new world we’re being introduced to it can be a bit jarring at times when something is just brushed on by that we’ve never seen before and then move on with the story.

I also felt like not a lot in the grander scope of things actually happened in this issue. While it is just setting up for the larger story, we don’t spend a lot of time with our main characters and the world they inhabit before shoving them off into an oncoming war. So there is sort of a disconnect with trying to emotionally attach yourself to Winona, her friend Raul, or Jackelyn of Fey. I’m sure we’ll get there, but it would’ve been nice to slow down for a few pages and just live with them and their society for a bit. 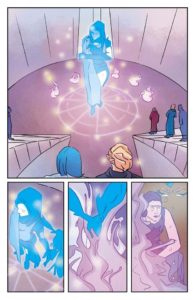 Liana’s art is gorgeous to look at. It’s brisk pace, kinetic feel, and the wonder that comes from some of the faeries environments are breathtaking. And Rebecca’s coloring is simply wondrous. While Liana doesn’t go into a lot of great detail some of the time with certain scenes, I don’t that should be seen as a disadvantage. Her eye keeps your focused on where it needs to go and allows the characters to blend in and feel at home in their environments.

Only once was really unsure of what was going on, and that’s on Page 12 when someone who’s in a fight is taken hostage. It seems for a moment that she has the upper hand and then bam, she’s in the enemy’s custody. Unless there is an in-between scene we weren’t supposed to see yet, that page in particular confused me and took me out of the story. 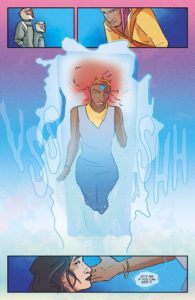 She Said Destroy really is a fun read though and the look and feel of it is totally unique to anything I’ve ever read before which made me very happy to discover. There’s been a lot of high profile buzz surrounding this book in the months leading up to its release, and now that it’s here definitely run down to your local comic shop and destroy– I mean calmly enter through the front doors and pick yourself up a copy!

It’s well worth it and out today on May 29th!

Summary: Over millenniums, Brigid, Goddess of the Sun, has conquered and converted the entire solar system into worshiping her and her alone, save one space colony. The Witches of Fey are the last believers of The Morrigan, Goddess of the Death, Brigid’s sister and the only other God left. As Brigid’s forces prepare for one final battle, The Morrigan prepares to do what she does best: Destroy!