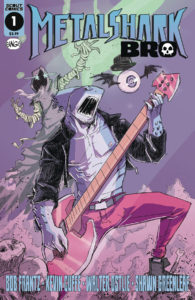 Holy Metal Shark Bite, Batman! When Kevin Cuffe hit me up over Twitter to check out Metalshark Bro from him, Bob Frantz, and Walter Ostlie, I had no friggin’ idea what I was in for! And that, my friends? Made this insanely enjoyable because of that. Well… That, and the fact this was practically balls to the walls wildly fun from start to finish. Reminding me very happily of several other titles I’ve read over the years that were of a similar nature and that’s just awesome. Now, in this here title, you’ve got your basic average Shark doing his every day thing. You know, swimmin’ in the ocean, eatin’ whatever is unfortunate to come in his path. Even if its some piece of garbage that somehow ended up in the ocean for whatever reason. DARN LITTER BUGS!

And then… And then he ends up doing something he shouldn’t. Something that gets him stuck doing work that a certain devil spawn himself should be doing instead of being a lazy punk! I should take a moment to mention that this here book has certain Biblical related themes that may or may not offend Religious types. Unless you’re not the easily offended type then you’re good to go with no worries at all and can freely enjoy the wild bloody soul taking adventures our Shark Bro has to go through. And yes, you read that right folks, the newly dubbed Metalshark Bro has to collect souls for Beezlebra cause he screwed up (ever so accidentally) a deal that had been struck and now is stuck in a humanoid body doing stuff no Shark before him has ever done before! Even making a new friend in the process!

Naturally, his new friend can relate to his being shaped by dark magics thanks to the fact he’s a talking eyeball named Ira! How he talks, hears, or eats is a complete mystery but that’s part of this book’s charm where the kooky (and bloody) insanity is concerned! And plus, how often do you see a shark man fight a giant robot!? Not very often, that’s what! Which was another thing about this GN that’s just so fun to read and I can only imagine how much fun the creative team had in making this book. From the trio creating and writing it to Walter Ostlie getting to do the art and colors! Chas! Pangburn probably had a lot of fun himself with the lettering! So if you enjoy the likes of Tenacious D, Aqua Teen Hunger Force, and Rick and Morty, Metalshark Bro will be for you!

Metalshark Bro is a book that proves you don’t need some great mystery or dark and gritty to have a damn good story. As this was done (at least in my view anyway) for the pure fun of creating a wild ride for those who love comics that aren’t so gosh darned serious! And with the ending our trio left us with, I can only imagine how much more craziness they have in store for the world of Metalshark Bro! Along with how much its bound to annoy our Shark Bro of the Metal Ocean!

Editor’s Note: Now… Get the Fin over to the Metalshark Bro website and grab up a copy today! Or you just might be Shark food if ya don’t, bro! You can also find the Fin thing over at Scout Comics as well! It should also be said that whatever copies of the first print run are left in comic shops or on the Scout Comics website are all that is available of said first print run.