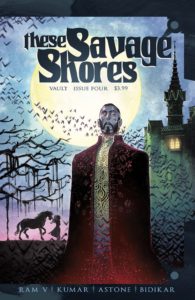 Hot damn, man, what a freaking issue! Ram V continues to impress with his writing and I am all in for it. The inner struggles, the troubles of war, and many a surprise through out this 4th issue. The one at the end of the book being especially heartbreaking for Bishan. And chances are, if you’ve read this issue, you know exactly what I’m talking about. I love Bishan’s other form, its exactly the kind of thing you DON’T want pissed off at you in some alley. Or, well, anywhere else for that matter! Have on your side in a fight? Definitely. But not pissed at you! I’m not sure if its an actual symbolic meaning or an omen, but it took me reading through this issue a second time to realize there was more to what Kori sees when a tree gets hit by a force of nature.

Rather, that its a certain tree we’ve seen before and it makes me curious how Bishan would have reacted if things had gone much differently by the end of this issue. Unfortunately, its not the only thing we’re witness too where bad things happen and Sumit Kumar brings it all to life so damned well. Vittorio Astone’s colors making it even more vivid (and kinda bloody) for us readers is a pure bonus as far as I’m concerned. Sometimes, doing lettering a certain way can be tricky, especially if you’re using colored backgrounds for certain characters. But I felt Aditya Bidikar did a superb job in making the letters dialogue have their own identities if that makes sense when we see the Young Prince/King’s letter to Bishan and later, Bishan’s letter to Kori.

One thing I’m curious about is if Bishan had known what would happen much later on, if he still would have taken Alain Pierrefont’s unlife? Something I’m sure he’ll be thinking about for years to come once all is said and done. That is… If he doesn’t end up dead himself!

With the cliffhanger (shocking and horrifying) at the end of this issue, I can’t wait to see what Ram has in store for us next. As no doubt its gonna be some wild stuff! Heck, I hope we get to see more then be told of how Kori got her change as well!

Summary: The shadow of war is cast over the land, where people and promises are broken alike. The smell of blood calls to beasts. Now is the time of monsters. Along these savage shores, where hope is folly, and fortune is the lie of a cruel whim.