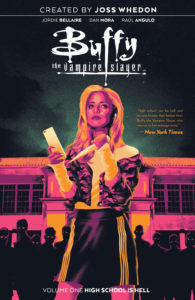 When I first heard about BOOM! getting the license for the Buffy comics, I found myself curious about what they’d do with the property. Would they take off from wherever Dark Horse left off? Would they do their own continuation after the show’s end? Or would they just end up doing their own thing like with the Mighty Morphin’ Power Rangers? Sometime later, I got my answer after reading the first issue a few months after it came out and saw that it would be a re-imagining. And this time, it didn’t exactly throw me off like with the Power Rangers when their comic first started coming out from BOOM! a few years ago. This re-imagining also feels like I’m reading a well written fanfic by a fan and I don’t mean that as a bad thing either.

Especially since I myself write a lot of fanfic for that matter. I’m actually liking the fact that the characters for the most part are different and sort of mashed up with their selves from later seasons. Drusilla’s not a nutjob and more Darla like as an example of the characters being different. Makes you wonder if she would have been like this on the show if she hadn’t gone loopy de loop courtesy of Angelus. Is he even her Sire in this re-imagining? Is it someone else? I look forward to finding out! Seeing Joyce alive and well here makes me really happy to see and I’m grateful as Hell this trade/volume is coming out as its made it so much easier (and quicker) for me to catch up. Especially with that ending where Xander’s concerned!

Speaking of him, I was honestly surprised it was him in the blue dialogue talking about how he feels and I wouldn’t have caught on to that if I hadn’t been re-reading through the first issue again. It makes you wonder if this is how he may have actually felt in the show back in the day and we just never knew aside from certain points in time. Drusilla plays on that so well as we unfortunately see later on and makes me wonder if she took lessons from Darla or her Sire. Whomever that might be. As originally, I just thought we were seeing Buffy’s thoughts until I cottoned on to things.

I love that there doesn’t seem to be much in the way of the ‘Sunnydale Blindness Syndrome’ that seemed to be a thing in the show in this re-imagining. The ‘weirdness’ seems accepted more or less, even with a giant talking Bat out and about! Hopefully we get to see more of him later on and what exactly it is he’ll be needed for. Although, Cordy actually being nice and not all that bitchy is a little bizarre and I’d love to see the original Cordy’s reaction to that! How much of a part she’ll have in this re-imagining will be interesting to see. Especially where what looks to be a crush of her’s is concerned! I’m also curious to see how much of a part Willow’s girlfriend, Rose, will have in things. How long will she be kept in the dark? Is she even in the dark? Is Robin even in the dark?

How will Buffy’s mom find out where the truth is concerned? Will Buffy and her mother’s boyfriend actually manage to get along? I’m also liking how Buffy actually mixes in the truth with her responses to her mom’s questions and there’s no drama where all that’s concerned. But these questions that hopefully we get to see answered as this take on the Buffyverse goes on, which is hopefully a good long while! And with how things are shaping up for the next storyline, Xander himself is probably gonna wish like Hell he had actually said what was on his mind instead of keeping it to himself! Jordie Bellaire definitely has me hooked here and I am looking forward to more of what she has in store for this re-imagining of the Buffyverse! Alongside with Dan Mora, Raul Angulo, and Ed Dukeshire!

Summary: Go back to the beginning as the critically acclaimed pop culture phenomenon Buffy The Vampire Slayer is reimagined under the guidance of series creator Joss Whedon.

This is the Buffy Summers you know, who wants what every average teenager wants: friends at her new school, decent grades, and to escape her imposed destiny as the next in a long line of vampire slayers tasked with defeating the forces of evil.

But her world looks a lot more like the one outside your window, as Jordie Bellaire (Redlands) and Russ Manning Award-Winner Dan Mora (Saban’s Go Go Power Rangers) bring Buffy into a new era with new challenges, new friends…and a few enemies you might already recognize. But the more things change, the more they stay the same, as the Gang faces brand new Big Bads, and the threat lurking beneath the perfectly manicured exterior of Sunnydale High confirms what every teenager has always known: high school truly is hell.

WELCOME BACK TO THE HELLMOUTH, FOR THE FIRST TIME!