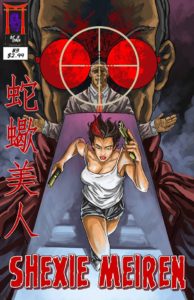 Issue #3 finishes out this first little mini arc in a timely fashion. Literally. As the story plays out like one of those scenes in a movie where the bounty hunter is trying to find their prey during a bit event and it all comes down to the very last second. It’s exactly that, but it’s done with finesse that I found quite delightful to be reading. Though the characters aren’t unique in their service to the story, they feel necessary to tell this story and Michael Kelley still finds way to make them feel fresh and delightful to read. It helps that everyone’s character designs to look pretty cool.

The mysterious hunter that is shaking up Shexie’s world has one badass scar on his face that I am incredibly interested to know where it came from.

I’m enjoying Shexie tremendously and with issue #3 it just keeps being fun. I would have liked to have seen what a full on fight between Shexie and Ke Ci would’ve been like, but how Michael handles the dynamic between these two character’s even though they never get to meet is sophisticated in the approach. And is immediately made better by the looming mystery now attached to the end of their run together.

There was one moment where I was confused by who was talking between Governor Zhe and the Police Chief only because how they’re framed during the dialogue exchange it feels like a coloring mistake has Zhe saying the Chief’s line. But upon a second take I realized it was in fact Zhe speaking, but at a point to where it wouldn’t make sense that he would say anything. I feel like that’s an oversight but it doesn’t ruin the book.

It was nice to have the line explaining that only guests are allowed to attend the press conference as it means most of the city can be empty, but still give us a crowd big enough for Zhe to speak to. And it also continues to show how politics is for the most part and optics game. Actual political agendas aside. It’s a nice touch that I feel like this story needed.

Art Rain’s art continues to impress me. Although at this point I would like to see Shexie’s hair share those tints of red that the version of her on the cover and in pin-up illustrations show. I think that would do a lot for her character. Same with Macy and her blonde hair. I noticed it more this issue of how the two of them sort of begin to look like background characters more so than main characters because so many supporting characters get those cool accent colors I mentioned in the previous review, but these two generally don’t.

But that action is still great, the moments that are meant to feel alive feel like they have a pulse. And aesthetically I am enjoying the work being put into the atmosphere of this world and it’s characters. I think at this point if a little more detail could go into the backgrounds, and maybe just more story could actually happen in its each issue, I think these books would sore even higher.

Still, go support Shexie Meiren. The series is worth it.

Summary: After interrogating the accountant to the Liu Mang triad, Shexi confirmed that her target – Taiwanese assassin Ke Ci – plans to kill Governor Zhe during a highly publicized ceremony later in the day. But unbeknownst to anyone, a shadowy figure is watching things play out.