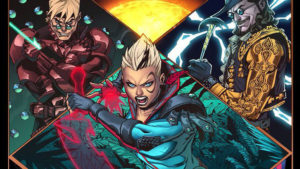 JR: I’m really happy to see that the Frontera project is back up on Kickstarter. I love Science Fiction – to me it’s about possibilities – anything could happen! Frontera looks like a really imaginative story and world that you’ve put a lot of work into!

AK: That is also what I love about Sci-Fi. You can create it all. It is yours to make as cool and interesting as you want. There have been so many great shows from the past from Babylon 5 to LEXX and Guardians of the Galaxy to The Fifth Element. I have put a lot of work into it. I have been working on it since March of 2014 but the studying and ideas have been a lifetime in the making.

JR: You’re a first-time comic creator. What made you sit down and say to yourself, “I want to create a comic book!”

AK: It has been a while, in fact almost five years today. This was almost an experience as if I was being guided to making it a comic. Originally it was going to be a book. I had the idea for my own space western and at the time there were a couple of things that resembled that but I had not heard of or looked in on them. I had all of these ideas and I went to a company that helps clients produce novels. I was talking to the lady and she said that it should be a comic. She said that the way I was explaining it was so detailed that it needed to be seen. So that is how it became a comic. The writing process took a couple of years. I have the whole first arc which is the tag line “Flash of Dawn” completely written already and am working on several other arcs and a prequel.

JR: That makes sense, especially with your character designs. I think you have visuals that would be very difficult to describe with words. That’s how I think about comics: they gives creators an expanded vocabulary to communicate ideas that would be difficult for novel authors. Do you ever notice when authors try to describe something like aliens, they just have to say they’re “bug-like” or something like that because they can’t show them?

AJ: It would be very difficult and limiting. I actually am the one who designed all of the characters, costumes, aliens, ships. What you see in the comic fell out of my head onto the page. Myk Emmshin (the penciller) and Everardo Orozco (the colorist) have done a magnificent job in bringing my imagination to life. 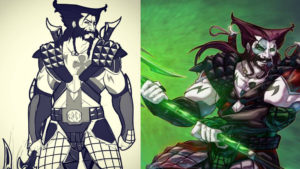 JR: You’re a fan of hard Rock music. I’m a huge fan too and I can see some influence of that aesthetic on the character designs for Frontera. As a kid, once I discovered Rock, Hard Rock and Metal, I loved going into record shops and buying albums just based on the covers. So many of them had wild Sci-Fi, Fantasy, and Horror-themed art. Can you tell me a bit more about how music has influenced Frontera?

AK: Well, for one, one of my main characters, Fess Frontera, is a huge Metalhead as am I. I especially love Metal that that has not been widely heard but is still great. I even love some Japanese Metal from the ’80s. It is so good that it does not matter that the guy or girl is singing in another language. Check out Anthem, 44 Magnum, or Seikima II. Great music! Heavy metal and rock have been my favorite music ever since I first discovered it back in the early ’90s. There are also some characters such as Tyran who has kind of a Glam Rock motif. So it is there, believe me.

JR: The first issue is coming out. What can you tell us about the world of Frontera as the story begins?

AK: Well, it really starts with a coming of age story for my main character, Makota, where she is about to be set off on a journey that she is not expecting. It is her destiny and it will lead her into meeting new friends and making enemies. Then there are other characters such as Fess Frontera, Hannibal LockHaven, and Moses Mayfield who also have an arc that goes along with it. So essentially it starts with a journey. 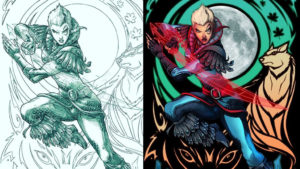 JR: From what I understand, Frontera is the name of a planet, and there’s also a character named Fess Frontera who is that planet’s discoverer. But the first issue follows a young female protagonist named Makota. Who is she?

AK: Makota is a young woman who was raised on the planet Shipolo (which has been renamed Frontera) by a race of wolf-like aliens as their own. She is the adopted daughter of the leader of the wolf clan named Ogama. That is where the book starts out as she is off to a gauntlet to see if she is worthy of leading her clan.

JR: From the Kickstarter, it seems that the main conflict in the story is that the world of Frontera is in danger. What can you tell us about this?

AK: It will be discussed in that issue and in later issues. It deals with an alien race that is exterminating other worlds. The Universal government in my comic is called the Unison of Allegiant Stars and they believe that Frontera is the next world to be dealt a blow. They are offering their Tagma (Army) to help defend the planet and that leads into the future issues as well.

JR: What can you tell us about the villains in this story?

AK: The Fearless are the aliens who are annihilating whole worlds. There are not many of them in the first issue. It deals more with the origin of the main characters and setting up the stage for the coming events and the conflict ahead. 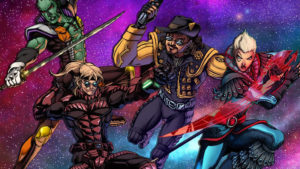 JR: I’ve been really amazed by the sheer number of character designs being released on your Social Media. Some look like Warriors, others look like Centurion Gladiators, Pirates or Cavaliers, Samurai and different races of Anthropomorphic Animal Aliens. Was it a challenge to create a world where all of these characters could coexist?

AK: It just kind of fell into place. Each character fits a specific role. Eventually, I plan on doing spin-offs for many of the secondary characters and even lower characters. I think that they each have potential to have their own stories. The book may be called Frontera but to me this book is Makota’s story.

JR: What would you say to anyone who is undecided or on the fence about backing Frontera to convince them to get on board?

AK: This book is my special vision that has taken years and thousands of dollars to produce. I spared no expense in that we have designed hundreds of characters, ships and aliens to fill these pages. This is not some throwaway project that I will do today and forget tomorrow. It is my lifelong dream to create something that not only looks and feels like its own universe but will also tell a moral like those great science fiction tales and shows of old. If readers give my magazine a chance they will see something that is truly amazing in this day and age; something that is special and its own thing and some of the most beautiful artwork to ever grace the pages of comics. And it is only the beginning.

JR: Frontera has some very far out, colorful character designs. How do you go about describing the characters you see in your head to your artist to draw?

AK: I wanted to be an artist when I was younger. I was good then, but I decided that I wanted to be a writer because back then in the 1980s artists did not write. So I changed and then the ’90s came and the artists wrote – ha! I actually draw them and then my artist, Myk Emmshin, makes my sketch into a character and Everardo Orozco colors it. There are some verbal cues however as well, and sometimes I will send a picture for reference.

JR: Oh nice! So you’re not just doing the writing, but you’re doing the concept design too?

AK: I also design some of the pages. Myk and Everardo bring them to life. There are some pages though that I have handed over to them with just some ideas and they have done marvelously! The book truly is a team effort. Like I said the ideas oozed out right onto the page. 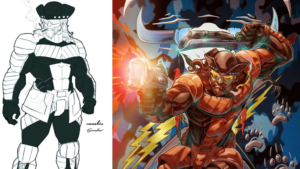 JR: Creating a comic book is often very challenging, especially for first time creators. They have to deal with everything from small budgets, busy day job work schedules, working with other team members remotely, learning new software as well as just staying motivated along the journey to complete the project. What challenges have you faced in bringing Frontera to life?

AK: The challenges with Frontera mainly come from my vision being bigger than my means sometimes. I have had many jobs since starting back in ’14 and it has taken a couple of years just to finish this first book. I have it now to where it will take less time but for me it is an investment. I feel that when you put your heart, blood, and soul into something that people will see. They will know and in turn what you have created will grow.

JR: I agree – I think your passion will attract fans! Now you’re a fellow Missourian (I’m in St. Louis). Do you plan to promote Frontera at any local area comic book stores or conventions in the near future?

AK: In fact I lived in St. Louis for a number of years as well. Yes, I do, once we have some comics and posters ready after the Kickstarter. I have only really been to one con and that was a Wizard World several years ago, back in 2000 in Chicago. I am looking forward to attending conventions and meeting new fans. 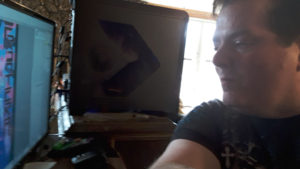 JR: Can you tell us a bit about your partnership with Star Cross Comics?

AK: I have worked with Star Cross for a little over a year now, and they are great! They are going to help us market the book in parts of the country that we are not in yet, and that was something that was interesting to me. Joe Spicer, the company president, has been great to work with, and I have had nothing but a pleasant experience working with him. He has been very understanding knowing that I am working on creating quality with my book and that I was not willing to rush it for any reason. They were very inviting and willing to work with my book even though they know that Frontera is not a Christian based comic as are many of their other books.

JR: Where can fans find out more about Frontera online?

AK: Right now…the best place is on our Kickstarter page!

Editor’s Note: Frontera has reached its 1,250 dollar goal with 56 hours left to go! And with printing for #1 having been successfully achieved thanks to your help, AJ hopes this will also be enough for funding of #2 with your continued support of the current Kickstarter!