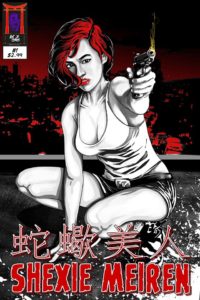 Shexie Meiren is a pretty fun comic. Let me get that out of the way right off the bat. Diving into the book, the story is a bit by the numbers in terms of how the characters and story is portrayed, but it’s written in a really fun way that pulls you in and keeps you there for the whole wild ride. And especially #2 introduces a new element to this story that has me incredibly interested to see where it ends up going.

Overall, the narrative is simply put the story of a bounty hunter who works exclusively for hire. And though it seems she doesn’t want to see innocents hurt, Shexie cares more about the money than others. Which there’s nothing wrong with that for a protagonist like this. Watching Shexie do what is right but also be self-serving in that respect is interesting in and of itself. I will say, however, that having a non-Asian looking character running around China with her American partner is problematic. And maybe Shexie is Chinese, but she does not look it. There is a distinct difference in her face and the faces of the characters who are of Chinese nationality in this book.

These first two issues operate as introductions to Shexie and Macy, as well as the supporting characters for the adventures to come. As well as the setting up the first arc of the series which is follows Shexie attempting to stop an attempt on the Governor’s life. Not sure how many issues this story will follow, but it’s been a lot of fun to watch it unfold.

One discretion I did have about the story, is that it’s set up early on that – or at least it comes across as if – most people in the city of Guangzhou have left the city to go on a holiday celebration with their out of city families. Which is odd, but if that’s how it is in this world then okay. However, while everyone seems to be away, the Governor is holding a press conference of sorts out in the public during this time and I’m left wondering how feasible it is that the denizens, “the lonely” as they’re described in the book, left in Guangzhou will be enough to fill a crowd worthy of a giant metropolis’ leader.

I think all the characters are fun. The dialogue is snappily well written. However, any time Shexie or Macy kick and give a big “Hiya” or “Heya” I do groan. It’s an over-played trope even by the standards of what this world is playing by.

The art, too, is so intriguing. Where the background lack focus and detail, mostly defined by abstract brush strokes or by being completely non-existent at all, the characters are rendered in great detail and it really drives your focus to what the book wants you to be paying attention to. And the art for the characters are really good. I like Art Rain’s sexy, curvy style. The fight scenes are fluid and kinetic, and I can feel the humming of the motorcycle whenever it’s turning on or on the road.

My favorite thing about Shexie has to be the color choices. In a mostly black and white comic, there are parts of each character that generally rendered in accent colors to the scene. Like one character is completely black and white except for their purple tie, or only their red spectacles are colored. It’s things like that that I find to be so cool and add a bit of stylistic flair to the story. It elevates this comic so to speak.

I am enjoying Shexie Meiren and I’m excited to see where the story goes. Despite its flaws, it’s gotten me hooked. And that’s a great thing in my book. I’m really looking forward to issue #3.

Final Score: 4 Multi-Colored Bikinis out of 5

Summary: After years of brutal police crackdowns on crime, Guangzhou has become one of the safest cities in China. The once powerful Triads have been split into small gangs that have taken to fighting each other for survival. The citizens of Guangzhou praise their new Governor for cleaning up the streets. But not all is as it seems. Forces are beginning to rise once again to rebuild their once-illustrious underworld empires. To stem the tide of this rebirth, the police have turned to bounty hunter Shexie Meiren. Together with her partner – American computer hacker Macy Makker – they take on criminal elements of the city… and make a profit.