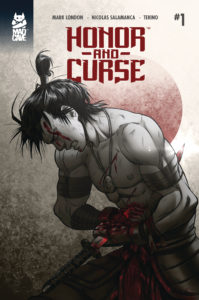 There’s been quite the bit of hype surrounding Mad Cave’s latest offering in the form of Honor And Curse. And some of you may even recall the interview I had with Mark where Honor and Curse is concerned sometime ago. But is the hype surrounding this latest offering that came out last month worth it? In my honest view, yes, yes it does. Sure, this is only the first issue but I still think it lives up to the hype. Others might disagree with me but that’s neither here nor there. And as far as I know, the creative team Mark London has for this book, is the first time I’ve been exposed to their respective works. But I could be wrong on that account.

Nicolas Salamanca, Tekino, and Miguel Angel Zapata all do fantastic in their respective duties on this book. And hopefully they stick around for the entire run of the series.

Mark himself easily could have gone full tilt in the first issue alone, but chose not too. Instead, focusing on the build up and introduction of everything so that us readers would have a starting clue on things. Although how exactly Genshi gets ‘lucky’ enough to have a Tengu bothering him isn’t clear but its likely to do with how his family got royally screwed over by some jerks when he was a kiddo. Which makes me curious if he ever found them and got revenge for what they did to his family. Or if he ever found his brother after that whole unfortunate mess.

Secret love affairs, rumblings of war, demonic influences, and what sounds like the stirrings of betrayal all have me curious as to how it all ends up playing out. And if Genshi’s even able to continue walking by the end of this series. Don’t sleep on this one folks, cause just like the rest of Mad Cave’s offerings, this one definitely has the potential to be a damn great one!

Summary: Orphaned as a young boy, Genshi Sakagura was adopted by the Iga clan after witnessing the murder of his parents. Now, Genshi is a promising young shinobi with dreams of marrying Lord Haruki’s beautiful daughter, Akemi, and leading the Iga clan warriors into battle. Genshi’s future was promising, until his past came back to torment him in the form of an evil mountain spirit known as a Tengu. This demon relentlessly haunts Genshi’s dreams and bends reality around him, but nothing compares to when the Tengu consumes him; Genshi transforms into an unstoppable force of nature incapable of remorse!