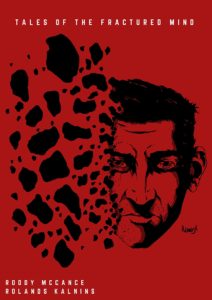 I’ve expressed regret in the past of not having read a comic much sooner and wanting to kick myself for taking so long to do it. And after reading this Anthology of Tales Of The Fractured Mind from Roddy McCance and Rolands Kalnins, I am definitely feeling that way right now. As it is, I wasn’t expecting to be hit by multiple emotional gut punches by the time I finished this Anthology. But I was and that’s a sign of just how powerful dealing with Mental Health can be. Powerful AND exhausting. I was actually sent TOTFM last February but at the time, I wasn’t able to do much considering I had just moved to Texas and then later on, spent some time catching up because of said move. And for that, I do make my apologies for unintentionally taking so long to do this review.

TOTFM, as you might have guessed, is all about Mental Health and how it can have its difficulties for those who are troubled. Such as say a War Veteran, someone whose found themselves depressed, or someone dealing with a bullying situation, a loved one experiencing Dementia, or an individual dealing with Gender Dysphoria. Examples of which can be found in the 60 pages of TOTFM and a couple of other instances of Mental Health issues. Examples I’m sure those who’ve read this Anthology by this point can relate too in some way, or at least know of someone who can relate and might have a method of some kind they can discuss that helped them through their tough times. TOTFM serves a very important reminder that those suffering from Mental Health issues are people just like us.

And shouldn’t be treated any differently, especially in an unkind manner as they don’t deserve something like that. And instead, to be there for them as they deal with their situations. Whether its help through a special song or talking with a Therapist or some other method. Something like Dementia, as shown in the 5th story ‘Our Song‘, can definitely be a strain on a relationship. To the point it could probably destroy said relationship unless you’re truly willing to stand by your loved one no matter what where Dementia is concerned. Its unfortunate that some might not understand but with time, they can find that understanding if they are willing and perhaps help others who were once like them to find a way to understand.

Life’s not easy, especially if you have a Mental Health issue, but if you have the support of others, it can make things a little easier on you. And the last thing anyone dealing with Mental Health wants is to be stigmatized or worse for their problems that they have to deal with day in and day out. Permanent or not.

TOTFM was also a successful Kickstarter last year as well. Which is a damn good thing as its just one way to help show how one suffering deals with their dilemma. Giving us a better understanding of those suffering. If you haven’t heard of TOTFM by now or have and haven’t read it, I urge you to re-consider and perhaps share it with others. As you never know if it could be a big help to someone.

Summary: Tales Of The Fractured Mind is an anthology of stories aimed at breaking the stigma surrounding mental health.