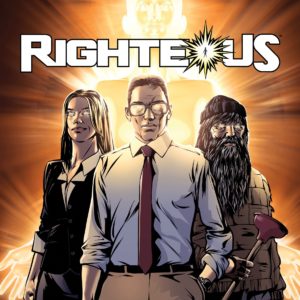 When you think of comic books and the heroes within, you usually associate the characters and stories they tell with fantasy and make believe situations. In the history of superheroes, characters like Batman, and The Punisher in some ways were as close to “real” as you can get. As time has passed, there have been others who resemble a more realistic persona and storyline in the world of comics, but none so much as the character in this new and amazing series known as Righteous.

Daniel Price, a typical young corporate guy driven by money, power, and prestige above all else. A well respected person within his Risk Analysis/Management Firm known as LRB & Associates, and a wannabe “Regular Joe” at home. Daniel’s story is one of change in the form of a visit from a possible spirit overnight. Was it real or was it a dream? This is the question that not only Daniel, but you as a reader will be asking throughout this entire first incredible issue.

This first book sets up a great story that gets more interesting at the turn of every page. Just as you begin to find the answer to one question, almost instantly there is another mystery that needs solving within these pages. There are 118 pages in this opening Origin Story, and I was hooked after reading just the first 10. There are over 12 characters, each with large and or small roles that all help to build and create a very interesting and entertaining story that also sends a powerful message and brings light to certain questions that we all need to begin asking ourselves.

Like most superheroes, in the beginning Daniel is clueless to acknowledging that he even has any new “powers”. But after a few repeating circumstantial situations, he starts to understand that something different is taking place. Daniel spends a lot of time not only trying to figure out what was happening to him, but also how to fight it or avoid it from happening as often as it was. As the story progresses, you the reader will catch on to a continuing theme that becomes obvious by the end. This book is titled “Righteous” but it should be called “Contagious” because of how things begin to play out. I don’t want to give anything away, but you and Daniel will discover the true nature of his newfound abilities by the end of this awesome first installment of a great new series.

Good verses Evil, right verses wrong, moral verses immoral, selfish verses service, making a lot of money verses volunteering to help others. A form of battle that is as old as time, now placed in a setting as current as the life we all live today. Righteous tackles some of the issues we all face around the world. “Woke” is a popular term or buzzword being used often today. I feel that this story, although maybe just a simple comic book, might have the power to enlighten or “wake” up the social conscious of anyone who takes the time to read it. Is it more important to help yourself or to help others, and is there a level to which helping is either too much or not enough?

Righteous is perfect blend of comedy and serious drama that makes for a really fun read. You will enjoy this comic series as much as I did. This story is full of action, but action in a different sense of the word’s meaning. Not another violent punch your way to victory superhero story. Action, in the form of doing something and using your intelligence or resources to solve different problems. And personally, I can’t get enough of the character Gregg. Just wait until you get to the famous “Pantsola” line in this first issue, you will laugh out loud. And yes Gregg is just one of those “mysteries” mentioned earlier. What role does he inevitably play in this comic? Only time will tell, but there is no time to waste. Get your hands on a copy of Righteous today and begin your path on a journey to mystery and social awareness.

Editor’s Note: Interested in grabbing a copy for yourself? Head here! It should also be noted that Righteous was also a successful fund on Kickstarter as well!

Summary: A greedy corporate analyst’s life is forever changed when he contracts a supernatural disease that causes him to go out of his way to help others instead of earning money for himself. As his world collapses around him, Daniel discovers that every time he helps someone, they get it, too.