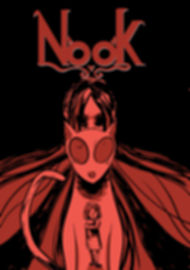 Set in France, 1939, at the outbreak of World War II, Nook is very much a book of conscience.

Despite the script opening with a drop of singular words, which is a practice I generally frown upon, due to its ambiguity (which is rarely rewarded on a cerebral level when working out their pertinence – or not), it’s otherwise a strong enough opener for this issue and the series.

Moving past my pet hate for obscure laconism, we’re quickly brought into the circumstances under which our main characters, a small family, are involved.

The chief protagonist for this issue is Avery, a young girl whose parents have removed her from Nazi Germany in its beginnings, her father concerned on the direction of where the political climate is going.

Buying a rundown property in France, the family cross the border of Germany into what Avery’s father considers a safer environment.

Upon arrival, Avery finds a Cat that is living in this new property, which she gives chase to her new-found playmate, only to discover a small door in a wall, leading to…?

Well, that remains to be seen, other than to say that when Avery discovers a spectral entity behind the door, it’s quite the disturbing experience, but it was just a bad dream, surely?

So far, my impression of Nook is that it’s well paced, and feels natural in that pacing, giving sufficient breathing room.

Thusat’s script, while benign in places, and could benefit from deeper character development, as I don’t feel any direct connection with the characters on a personal level, is otherwise thoughtful and unpretentious, and I get the feeling that this is a creator that is more interested in telling stories, rather than merely “making a name (brand) for himself”.

That’s an admirable, and rarer trait in creators these days, which is so refreshing to see. As I noted earlier about the laconic parts of the script, it is a pet hate of mine, and I did rather tire of reading “never again” throughout the pages, but at least in this particular case, these references were relevant and I got the point.

There’s also no mention of the parents’ names, only Avery, and this is important, as, without revealing any spoilers about the ending of the book, I believe we should know who they are. One could argue that the anonymity of them is reflective of the anonymity of so many of the victims of Nazi Germany, indeed, one could possibly claim that this is a deliberation on those grounds, but I am doubtful of this. For me, that’s just a mistake.

It’s a good opener for this 3 issue series, and we’re moving into “Pan’s Labyrinth” territory, with a touch of Sacco’s approach in “Palestine”, and although Thusat would lack in the benefit of personal experience that Sacco was sharing in that book, it’s fair to say that his approach and thoughtfulness bears similarity.

With regards to Biott’s art, it’s a little on the amateur hour level, and needs progressive improvement, proportions being off, which the main issue and the art is a little crude, although, surprisingly, with all that said, Biott’s strength is in story-telling.

While it would be an over-statement to go past ‘competent’, Biott has proven himself capable of pushing the story along relatively effortlessly, encumbered only by a lack of clarity in some images as to what is happening within them. Transitions are quite often either uncomfortable or, at worst, non-existent in a lot of art now, at the least, Biott has learned that this is an essential part of what makes Comics Comics. There’s room for improvement all round, but the potential is there for him as an Artist, if he can refine the work.

I’d also noticed in Biott’s lettering there is need for improvement as well. It’s not essentially bad, but some of the lettering is crude in its look, with much of the speech in the dialogue balloons off-centre, but a big ‘no-no’ arrives on page 9, panel 2, where the dialogue pointer is directed towards the Father, rather than Avery, when it’s clearly Avery’s dialogue. This will be quickly realised by the reader, but it’s definitely a fault.

The worst part about this error is that it was completely avoidable as well, there was plenty of ‘Negative Space’ to play with, so it isn’t like there would have been difficulty in doing the lettering with more care, especially in this instance.

Design wise, although a little ‘polish’ wouldn’t go amiss, the cover is nice and simple, with a subtle logo that was well thought out, the production values are also clear and crisp.

In closing, first, I’d like to praise this attempt from both Thusat and Biott, despite the faults I’ve noted, for the most part, it works well. I get the feeling this will be served better as a complete work, it feels a little on the brief side, but interestingly, this first issue could be just as easily read as a stand-alone piece, though I do feel it’s going to benefit more from a complete telling of the story.

Is this Caleb Thusat’s best? Frankly, I doubt it, there’s brimming potential, and though this is the first I’ve read of Thusat’s work, also out now is the trade paperback of Thusat’s “Alter-Life”, a title I’ve had curiosity about for some time. Caleb has kindly forwarded me a copy of it, and perhaps if I get to read it some time, I’ll cover it here, but the potential for that, both conceptually as a project, and for Thusat as a Writer shows favourably.

In the final analysis, is it worth giving your time to, along with your hard-earned? It’s certainly worth your time, partly because of the content, and partly because it won’t take up much of your time. I wonder if this is a nod to Thusat to give him the “go-ahead” to include more narrative within the script? What might seem critical could prove to be a gift in disguise here.

As for ‘bang for your buck’, well that, I believe, is too early to say, I’d want to read the entire series/collection before passing final judgement there, but if packaged up for around the $9.99 mark for the trade, most likely, it is. It’s good to see that there are still Writers out there tackling difficult themes, and this account of the cruelty and evil of Nazi Germany cannot be understated, I also admire the humility in which Nook has approached the subject, so yes, worth a look, folks.

Final rating (based on a single issue): 6/10, above average, but a need for improvement.

Summary: Fleeing the oppression of WWII Germany, Avery and her parents move to a remote town on the border of France. It is here she finds her new best friend, a cat named Nook. But, there is more to this cat than it seems. A dark and twisted history longs to be revealed. Avery is swept up into a deadly cycle of violence and will come to both fear and love her fuzzy new friend as the history of her new home is revealed.