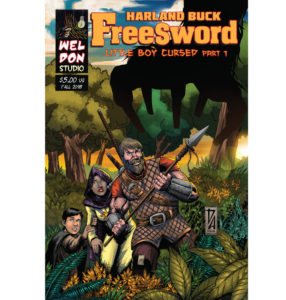 Scott and the Weldon Studio crew has come back with an all new offering for us comic loving folks to enjoy where Harland Buck is concerned! This time in the first part of a new storyline known as ‘Little Boy Cursed‘. Scott’s been steadily taking his time in building up the world of Harland in each new issue. Giving us a little there and a little there as it all comes together and taking no shortcuts as he does this. World building at its finest I’d say! I’ve enjoyed every bit of that I’ve so far read and even had to shake my head at Harland’s refusal to be fully open and allow a little something like love from a certain Lillian gal into his life. Fellow readers have probably done the same thing as well for that matter where that particular event’s concerned. Or perhaps they haven’t, who knows for certain!

Issue 6 brings us a bit more further into the world of Harland Buck where magic and myth is concerned. Naturally, this brings about its own bag of problems thanks in part to a bunch known as the ‘Aegis Armagon’, who deem those born with magic either blessed or cursed. And considering Scott’s a huge X-Men (Chris Claremont’s 17 year Uncanny X-Men run at that) fan, its easy to see where his inspiration for this aspect comes from. Not to mention his over all inspiration for Harland as a whole. These Aegis guys are folks I already strongly dislike just from the few short scenes seen of them in this 6th issue. Which shows Scott definitely can evoke some feelings in his readers and I like that a lot. How these Aegis people managed to get so in control of the Magically born is something I’m curious about and I hope we get to see how that came to be.

Though I wouldn’t be surprised if ol’ Scott only gives us a small hint or two and leaves us waiting until a later time about that whole thing! How Harland’s gonna gonna handle things in this latest adventure while he tries to protect Zadine and young Alon are things I’m looking forward too. And if whether or not this will put him in some major heat with the Aegis Armagon! Scott also nicely teases us with what looks to be a potential concern around the beginning and whether or not this ties into what Harland’s found himself in remains to be seen. Or if its something much worse given Kendall’s somewhat cryptic words. ‘Harland Buck: FreeSword‘ is definitely worth a look at instead of being slept on as the excellently paced writing, the coloring, lettering, and art are all superb in my honest opinion.

And so long as Scott has such a strong passion for Harland, I doubt that’s ever gonna end! So what more could you ask for?

Editor’s Note: Five dollars is well spent on a copy of this issue!

Summary: In this adventure, two runaways show Harland that some bed time stories are frighteningly real.