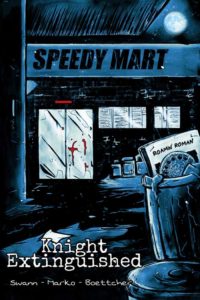 Depression is a growing epidemic across our nation; nearly one in twelve adults over the age of 20 experiences symptoms of depression according to the Nation Center of Health Statistics. (source) As a former mental health counselor I have worked with clients suffering from a variety of mood disorders, so I have a practical understanding of how the symptoms can manifest within depressive cycles. As diagnosis rates increase it is important to raise awareness of the how the symptoms of depression impacts your life. Knight Extinguished attempts to do that through the medium of independent comic books. Comics have been used to provide social commentary on public epidemics by weaving it into character arcs; but I have not come across a comic that was so issue specific as Knight Extinguished.

The plot revolves around a dedicated father who works overnight shifts at the local convenience mart to help support his family. As the night progresses unwelcome guests arrive at the convenience store leading to an unexpected twist and the real life impact that depression can have on friends and family. Writer Bryan Swann portrays the worst-case scenario without a lot of the subtitles. My major critique is that the symptoms that are prevalent in the disease are not represented. Symptoms such as negative self-talk or feelings of worthlessness could have been demonstrated in a clever or more abstract way but they weren’t. Most of this is for the sake of the twist but I would have loved to see more emphasis about the internal struggle the main character was having. Depression is a fog that engulfs your perspective until everything is lost in it. The struggle of a depressive cycle is found in the talking your way out of the depths the disease drags you too.

The art by Lukasz Marko and Kamil Boettcher is reminiscent of the Eastman and Laird run of the Teenage Mutant Ninja Turtles, it is at times crude but the consistency of the art in this style gives it a dream like quality that almost feels like a flashback scene. The coloring does a lot with a little and the layering effect gives the paper an older almost water damaged aesthetic. This choice works well for the subject matter as it subtly demonstrates the mental distress of the character. Overall I thought this was a valiant effort in raising awareness for a growing disease that effects at least someone you know. The major achievement of this piece is portraying that depression is an invisible disease that demonstrated by a secret pain that is buried deep within us. If only one person reads this comic and it leads to them seeking help then I say mission accomplished. 8/10

Editor’s Note: Head here to grab up a copy in either print or digital format!

Summary: Samson Knight is a family man working a second job overnight at the local gas station to support his family.