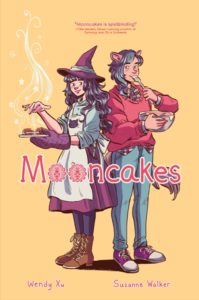 “Mooncakes is a labor of love. We set out to tell a story of reunion—two childhood crushes who find each other again to find out whether their friendship could be something more,” said the co-creators of Mooncakes.“ Nova and Tam’s love thrives in a rich, vibrant world of magic, demons, and elder witches, and their journey is a reflection of all we value as creators. We couldn’t be more thrilled that Lion Forge is releasing it in print, and we are so excited to share Nova and Tam’s story with the world!”

Nova Huang knows more about magic than your average teen witch. She works at her grandmothers’ bookshop, where she helps them loan out spell books and investigate any supernatural occurrences in their New England town.

One fateful night, she follows reports of a white wolf into the woods, and she comes across the unexpected: her childhood crush, Tam Lang, battling a horse demon in the woods. As a werewolf, Tam has been wandering from place to place for years, unable to call any town home.
Pursued by dark forces eager to claim the magic of wolves and out of options, Tam turns to Nova for help. Their latent feelings are rekindled against the backdrop of witchcraft, untested magic, occult rituals, and family ties both new and old in this enchanting tale of self-discovery.

Mooncakes began online in 2015 and has been updated on the first and fifteenth of each month since. Lion Forge first announced its publication in 2017, and today reveals both this much anticipated collection’s brand-new cover and publication date of October 2, 2019 in comic shops, and October 15 in bookstores. Mooncakes will resume online on February 14, with pages uploaded weekly ahead of the print release this fall. More can be found at http://mooncakescomic.tumblr.com/.

About the Authors:
Suzanne Walker is a Chicago-based writer and editor. Her short fiction has been published in Clarkesworld, and she is a former contributor to Women Write About Comics. She has spoken at numerous conventions on a variety of topics, ranging from disability representation in sci-fi/fantasy to the importance of fair compensation for marginalized SFF creators. By day, she works as a copyeditor for medical journals. You can find her livetweeting movies everyone else saw in childhood and occasionally yelling about baseball ontwitter: @suzusaur.

Wendy Xu is a Brooklyn-based illustrator and comics artist. Her work has been featured in Here We Are: Feminism for the Real World, Shattered: The Asian American Comics Anthology and as part of the New York Historical Society’s Chinese in America exhibit. You can find her rants against unseasoned chicken and other terrible cooking ideas on twitter: @angrygirLcomics