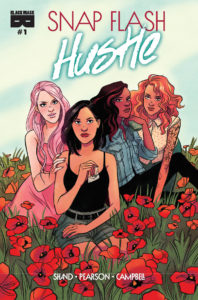 Thanks to Yahoo Messenger a number of years ago, I ended up becoming friends with several models across the big Pond thanks to a very special friend of mine named Emma. Now I don’t believe they were ever big name types and sadly, I’ve fallen out of contact with all of them over the years. Last I knew, Emma and one of the girls had fallen in love and gotten married and began to raise all 12 or 13 kids together in one big ol’ household. And no, I’m not joking about the amount of kids as my friend had a huge heart and was very willing to open her home to other kids. Albeit, one was her brother so it was only natural she did that. Anywho! Now, you might be wondering why I’m taking a slight trip down memory lane with all of you and well… Pat Shand and Emily Pearson’s offering of the first issue of Black Mask’s Snap Flash Hustle is exactly why. As the primary theme of it is modeling.

Oh! And a dash of drugs too! Which… With the modeling as a focus is something you don’t really see as a focus in comics all that much unless I’m just not paying enough attention. Haley Mori, our main gal of this here book, is just trying to make a living as an alternative model while dealing with a crap load of debt. And whether or not the photographer we see her with at the beginning is actually legit or just in it to make pictures without actually doing anything such as paying her for those pictures, is up to interpretation and definitely doesn’t help with her situation at all either. But thankfully, not all is lost for our gal Haley. At least… Not yet thanks to a wild card thrown her way that is set to put her on a new path. One that perhaps she’ll end up regretting at some point depending on how things go. Something I’m honestly looking forward to as Pat and Emily have hooked me in with this first issue and have me eagerly looking forward to the next.

As I’d love to know how the Snap Flash Hustle crew managed to get as successful as they have with the illegal side of things they’ve been doing and not get caught. Its a smart way to do it as you wouldn’t expect models to be doing this sort of thing either. Which makes one wonder if models in real life do it as well cause again, its just not something one would expect them to do. Now, this title is definitely NOT for kids or the easily offended at the sight of bare boobage. I will say that flat out here and now. And as far as I can remember, Snap Flash Hustle is the first time I’ve come across Emily Pearson’s artwork and I think her style for this works perfectly and I assume this is the same style she used while working as one of the artists for this year’s breakout hit of ‘The Wilds‘. Something I clearly need to go and read based on the summary I just read for (thank you ComiXology) that. I’m curious to see what those old friends of mine would think of this and if whether or not they would enjoy it.

Perhaps if I ever get back in touch with any of them (those still alive that is) I’ll know. One of the characters we meet, Simone, seems like a character that could potentially put a wrench in things if Haley or her husband doesn’t end up doing it first. Now, I say this based on a later reaction seen on her face and how she really didn’t like her part in Haley’s interrogation. Of course, I could be wrong but I also could be right and I look forward to seeing how her part in things plays out in future issues. Again, Pat and Emily have hooked me on this first solid outing of this new title of theirs and I can’t wait to see what all they have in store for us for however long this title goes. Don’t miss out when the time comes on December 5th!

Summary: Haley Mori, a downtrodden alternative-model, happens upon a secret society of elite models in NYC that are using their platforms to sell narcotics.