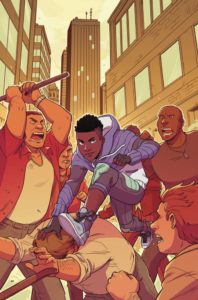 When Lion Forge sent me a list of titles they had coming out and were available for review in early November, the first issue of Quincredible caught my eye thanks to the summary about it. And now… Nearly a month later I finally took a few minutes to read this and I have to ask… WHY THE HELL DID I TAKE SO LONG TO READ THIS!? I absolutely loved this and really wishing there was more of it as Rodney Barnes did a great job reeling me in. You’ve got Quin, a kinda lonely teenaged African American young man who wants to keep his family safe by trying to develop his own personal home safety system. Which is pretty darn cool of him to be doing in my view and from the looks of it, its proving to not be an easy thing to do. And I imagine once the time finally comes, the stress and long hours put into it will have been worth it.

And to my knowledge, this is the first time I’ve read a Lion Forge book and I’m glad it ended up being this one. And if this is the kind of (awesome) writing to go by as a first time experience, I will be for sure reading other Lion Forge books. Of course if Rodney is writing any of them, so much the better. I love that this isn’t some high action thing in its first issue as is the case in a lot of super hero styled comics. Sure, we’ve got two events where some things happen but they aren’t the primary focus but do help drive the story forward as we see young Quin go about things. The fact that Rodney has this set in New Orleans some time after Hurricane Katrina definitely allows for a number of potential storylines to occur. Even if Quin isn’t the center of it but that event is definitely a reason he’s trying to make that personal home safety system. Along with the fact another event happens shortly after Katrina in this version of events that gives certain folks powers is another thing with plenty of stories to potentially tell.

Quin as we see is one of those who gets powers cause of that second event. Granted, he thinks his power is useless but since its invulnerability, its not all that bad! Another nice thing I am really liking about Quincredible is that Quin isn’t typically interested in the stereotypical hot girl of the school. But rather… The smart pretty one that he thinks isn’t into him while he’s into her but I dunno, she could be. Something I suppose we’ll get to possibly see explored as the title goes on for however long that is. We also get to see a couple of the heroes this universe has, one of which later gives Quin some much needed encouragement where his invulnerability is concerned. And with something Quin mentions at one point where the Police are concerned… I have to wonder if the bunch we see in this issue are just being jerks when they try to break up the rally one Dr. Davis has formed that Quin and smart girl Brittany attend. I’m curious though if Dr. Davis is really for the people or just playing them all since there’s a mystery character we get to see at the end.

No doubt, there’s gonna be some consequences for Quin after a few events that happened in this first issue and I am curious to see how that’s gonna play out. Especially with a trio of bullies who need a much better hobby. Selina Espiritu, Kelly Fitspatrick, and Tom Napolitano all do fantastic jobs in their respective duties on this book and I hope they are in it for the long haul of this book’s duration. And if you think you have just a bit more room for another Superhero book in your collection, Quincredible will be something to definitely add! Out today on November 28th!

Summary: Quinton, a high school sophomore, is looking to live his best life by moonlighting as a superhero. The catch? His power is invulnerability . . . and that’s the only power he has.