December 7th, 2018 — Scout Comics & Entertainment has had a spectacular past few months in both the comic book and entertainment worlds. We’ve announced a new corporate restructure this past October, along with multiple TV/Film deals and new series that will be hitting stores in 2019 and beyond.

Unfortunately, today’s announcement regards a more serious matter. We regret to inform everyone that our hit series, STABBITY BUNNY, has been put on hiatus due to the serious health problems of writer/creator Richard Rivera. As a result, Scout plans to cancel and re-solicit Stabbity Bunny issues #9 through #12 once they are fully completed by Richard and his team. Due to the uncertainty of Richard’s health, a realistic timetable for this is not available at this time. 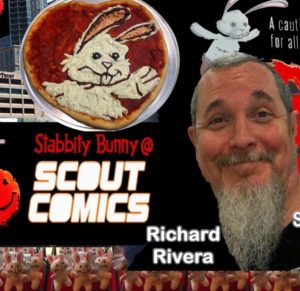 Wishing you all the best, Richard!

“Over the past four years, Richard and I have become great friends as we traveled the U.S. promoting our comics together,” said James Haick, President of Scout. “Richard’s work ethic and professionalism is second to none. If the convention we were attending opened at noon, Richard would be there at 7am. It breaks my heart to see his amazing book delayed and him sidelined like this. Thankfully, he is under great care and will hopefully be back shortly to do what he does best: Make comics.”

Richard’s upcoming titles, STABBITY EVER AFTER and SHADOW PLAY, will NOT be affected by this since the majority of both books have already been completed. Everyone here at Scout Comics wishes Richard and his family nothing but the best. We are looking forward to announcing the return of STABBITY BUNNY when Richard is back to full health.