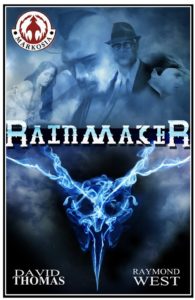 Its been awhile since I’ve had the pleasure of reading and reviewing a title from Markosia and after reading up some info on the book that I was sent, I thought why not and got to reading. I’ve gotta say, the beginning leaves me wanting to find the trucker we see and the guy he meets up with and beating the holy crap out of both where one particular girl is concerned. One who was already plagued by some strange spirit that she was trying to run away from, only to unknowingly end up in a much worse situation. Something tells me that had she known what would happen with the trucker, she would have let the strange spirit keep bothering her. Of course that could have its own draw backs but at least its not as demeaning and disgusting. And later on, we see that some other folks are having some problems and its entirely possible this strange spirit might be related. But is the girl responsible for setting it loose without necessarily having meant to do so?

Only David William Daniel Thomas and Raymond West know the answer to that! And if whether or not that poor girl is even alive some years later. Which is when the next set of problems begin, starting with some poor guy who just shows up with a really bad skin problem. Leading to us meeting Jon Rainmaker, our main man who is the one to call for when a job needs getting done. The little we’ve seen of him so far makes him seem like a decent guy that you could easily shoot the crap with even if you probably don’t even really know him that well. But I’ll get back to Rainmaker and the troubling situation that’s causing a problem or two in just a few, as I want to talk about the art done by Raymond Ross. And I mean no disrespect to Raymond when I say this, but I don’t feel the digitally generated done art style used in this book works for it. At one point, during the prologue featuring the unfortunate girl known as Rose, it looks like her and the trucker suddenly have a wreck and something goes flying out the front window. 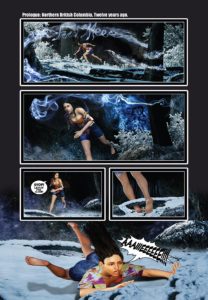 It wasn’t until a second read through that I actually realized what was going on and almost would have preferred it if a sudden wreck had happened instead. The fact she’s later picked up by the leg and her hair also feels out of place unless the guy who picked her up has super strength. That’s not a dig at the art itself but rather at the decision to go with that and I get attempting to keep nudity censored but it just doesn’t work. And as this is Raymond’s first work on a comic, he’s got a boat load of room to improve and perhaps we’ll see that over the course of this comic’s run. However long that is, I’m unsure of at this point but it has been mentioned that this is meant to be a bi-monthly on going series. So perhaps we’ll see Jon Rainmaker on further adventures once this storyline wraps up. Granted, its barely begun and has me wondering just what the threat is that’s seemingly attacking random strangers and if what we see at the beginning where the strange spirit is concerned is truly the threat. And if its connected to what’s going on 12 years later, where we meet Rainmaker for the first time.

I can’t wait to see how he handles this situation since he has prior experience in dealing with the paranormal, of course its a given that each encounter is always going to be different. And what exactly is going on at the end since David kinda leaves us with a mystery cliffhanger!? Makes me wonder if perhaps the Rose girl from 12 years prior will be the urgently needed to see reason or if its just something else entirely. Personally, I wouldn’t mind seeing Rose make her return to exact bloody revenge. Rainmaker #1 is on ComiXology and I definitely suggest giving it a chance and I look forward to seeing where David and Raymond takes this story.

Summary: Rainmaker follows the exploits of Captain Jon Rainmaker, a native Cree black ops specialist working for the Canadian Armed Forces. Rainmaker’s particular specialty is in eliminating menaces that would be dubbed paranormal. In this first story, Rainmaker is summoned to Afghanistan to deal with a weird menace that has been plaguing US FOB Echelon and the surrounding communities. What he finds there turns out to be assuredly supernatural but also, it turns out, deeply personal.