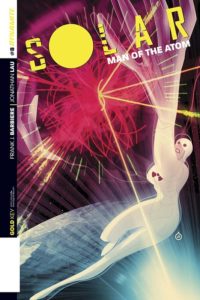 Okay, I’ve got mixed feelings on this book, so I’m just going to shoot from the top down.

This is my first outing with Solar under Dynamite, so without the benefit of having read the first 7 issues, I have to treat this as a stand-alone issue.

We open with a typically beautiful cover by the incredibly gifted Juan Doe, the overall cover design is eye-catching, and though simple in nature, I like the new uniform approach Dynamite is taking with their books, it’s distinctive and stands out on the shelf.

Onto the story! It’s a classic story, (in previous issues) girl meets Father, Father comes into contact with Daughter, accidentally irradiates her with his super-powers and goes off to train her into hopefully not becoming the universal death-machine he was in the past. I’m sure this is something we can all relate to.

In all earnest, the dialogue is contrived. It’s very atypical cut-and-paste dialogue from a blockbuster, and for that reason, it over-reaches. Example: “I’m the only one who can save Earth!” (Tentative pause) WHY?! That’s a bit presumptuous, isn’t it?! The guy who’s training you HAS done this before you know! He does have the same abilities! Mind you, Phil Selinski (Solar) did once decimate Earth. But hey, you’ve got to draw something from that experience, right?

That said, it’s clear Barbiere has a love for this new Solar, Erica (Phil’s Daughter). She’s spunky, fiesty, and creative. In fact, the resolution to this issue, where Phil and Erica are trying to prevent an invasion on Earth from a warrior species ends on a very creative note. Though I’ll not spoil it.

Barbiere is currently picking up steam as a writer, working for other very well-known indie publishers. including Dark Horse, Image, and over at the big leagues with Marvel. He has creative ideas and there’s potential there, but I won’t say I’m particularly impressed so far. Though I will suspend judgement for his future endeavours.

Jonathan Lau is quite the Artist, and for me, is this book’s biggest boon. Though I’d personally like to see those art lines tightened up and given more polish. As to be honest, this is among the most dynamic work I’ve seen in a while. It’s like Dynamite is giving a nod to the past, because the work is reminiscent of early Joe Quesada. Who as long-time fans of Solar will know, has had a stab at the character himself.

Omi Remalante Jr. has imbued the book with beautiful colours, especially with the nebula on the frontispiece. Lighting is just as important, when you’re working with outer space as a back-drop it can be easy to fall into a trap of too much or too little lighting. Remalante Jr. has fallen on the right side of this, using a surprising amount of light, yet keeping an even balance with the contrasting colours.

Now. There is a MAJOR problem on page 2. This might initially seem petty, but it really isn’t unimportant at all. This is where the credits are. It’s just plain confusing. The credits are off-set from where they should be, so instead of one consistent line on each of the credits, as enough space wasn’t provided, it just carries on to the next line.

From the way it reads out, if I didn’t know otherwise, I’d be assuming that ‘Frank Barbi-‘ is the Writer/Letterer, ‘Ere’ is the Artist, with a mysterious and “edgy” moniker, Jonathan Lau is the Colorist, with Omi Remalante Jr. providing the covers, possibly with some fellows called Juan Doe and this Jonathan Lau chap. Sloppy. Just sloppy.

In my final convalescence with this book, I’d rate it with a 6 out of 10. It’s an enjoyable read and it has a lot of potential, particularly with Erica. Would I enjoy reading more? Yes, I would, but Mr. Barbiere? Please work on that dialogue. And with that, I end mine for this issue.

Summary: The female Solar has done her best to atone for her dad’s interstellar sins… but she can’t stop the evil that’s coming to Earth. It’s an absolute disaster of a homecoming from Frank J. Barbiere (Five Ghosts) and Jonathan Lau (Kevin Smith’s Green Hornet)! 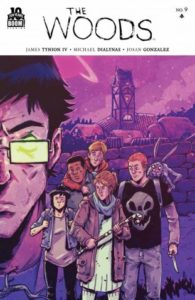 Summary: Having barely escaped their confrontation with the swarm, the hunters have led Adrian, Karen, Calder and company to their breathtaking home base. But just when they think they may have found answers to what brought them to this alien world, a horror from the teens’ past rears its ugly head…

This is my favorite book from BOOM! and it’s among the best I’m reading monthly as well. You are just hard pressed to find a better concept and execution. I mean sure, we started out with a whole flaming high school being transported to a moon, then suddenly as if that drama weren’t enough a group of kids strikes out on their own to find out once separated that they aren’t alone on this moon. And that the whole place is rigged like some giant living weapon.

The group of kids we’ve been introduced to run the gamut and they are as unique individually as you can get. And yet somehow this experience is bonding them in ways that high school never could. The fact that the people who’ve left Earth over the years for this moon, (okay, so left is a nice way of saying they were abducted I guess) are still there like time doesn’t work the same way here. I mean you’d think with new advancements people have made that it would’ve made a difference. And the Africans who ended up here? Well they’ve decided the colonial style people are crazy and have avoided them, and you’d think this moon is better populated than what it is.

Ah! Now after an interesting flashback we hit the present with the kids and you’ve got to think there has to be more among them aside from one who thinks they are not in a good place being among these folk. As a reader I can see the manipulation happening and since James has really gotten these kids under my skin since its started. His ability to tell a story, get the reader invested in his characters, and before you realize it. You are like looking out for them and you want them to succeed without getting themselves killed. Still can’t trust coach Clay and he’s with them now. So much drama happening within the story, the layering is beautifully done.

Poor Issac is still trying to cope with the fact that Ben kissed him and what that means. And is making for either denial or lashing out to happen because he’s frightened. Not only of their situation, cozying up to their kidnappers, but also of his feelings and his survival instincts. He’s going to have to step up and the speech he gives is really impressive. Since being beamed to the “ass end” of the universe they really aren’t kids anymore. And this journey they are on is exceptionally fascinating.

Adrian’s journey is his own at the moment and I’m more than a little interested in seeing if what he’ll do is for the greater good of his schoolmates or just for himself. Or instead become lost, obsessed with the control of this world he and the others are on. This is just another example of how good a writer James is, because anyway he goes you’re likely very happy to follow it!

There really is so much going on here and it all somehow gets the facetime it needs, the pacing is superb. Then there’s Michael and Josan, who have managed to really bring it all to life in a style all their own. They’ve nailed the look and feel of the individual characters regardless of what era they come from. And then the alien life forms as well as the vibrant colour schemes that seem unnatural have become commonplace.

BOOM! has one the absolute best books on the market in The Woods!