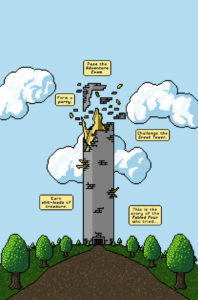 A new comic called Fabled Four is available on Kickstarter, and the art is unlike any in the entire industry. Co-Creators Luke Summerscales, Jonathan Carter and Jamie Me have created a comic that is made completely of pixel art. Even down to the lettering!

“It all came about randomly (Fabled Four).” Explains Jamie Me. “Jonathan is family, and Luke might as well be. One day I just brought up the idea that we could make a comic using the pixel-art style Luke specialises in. We then developed a story that took inspiration from our local area, and merged that with a fantasy setting.”

The story itself is about a group of thirty-something year olds that have fallen on hard times. After one of the group gets divorced a wild idea is brought up during their routine night out at the pub. What if they challenge the “Great Tower” that no-one has ever beaten? 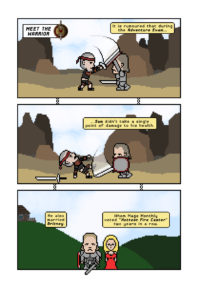 “Getting to your thirties is scary and hilarious in equal parts. The TV shows and celebrities give you this idea that you need to get it all done by that age, or something has gone wrong, but for a lot of us that’s not how it is. I wanted to create a story about this time in me and my friends lives, and take inspiration from our love of classic turn-based RPG’s like Final Fantasy, and movies like Lord of the Rings.” 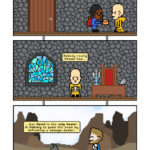 Fabled Four is currently available on Kickstarter for pre-order, and will be shipped in December digitally with the printed copies shipping in January. You can take a look at the campaign by visiting this link. 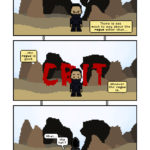 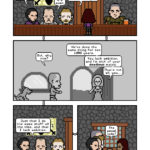