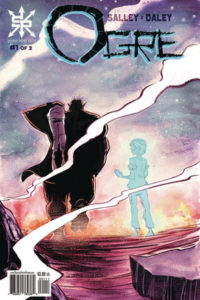 My first instinct is to look at anything that’s coming out from Source Point Press. Honestly they are hit or miss for me though the misses are few and far between. The premise, see above, however is one that I thought oh yeah this sounds interesting and I wanted to see what it would be all about. What I found here is something that was completely unexpected. This has a very odd charm to it and I was drawn to it in such a way that shouldn’t work, on paper, but really does in the most oddball couple kind of way. It is delightful and interesting and out of the ordinary and in some ways frustrating and yet there is no turning away once you start this book.

Bob does a really nice job with the way that this book is structured. The opening is narrated and we are in the middle of a siege upon a castle. The Cast of a Lord who has declared war upon a far superior force and is now paying the price. Not really spoilery there because you can see how the siege isn’t going in someone’s favour. Still the fact that we start in the middle of something is smartly done by Bob because it raises the intrigue and interest factor tenfold. Now we want to know what is going on and who the parties involved are so we keep reading. This was one hell of a great way to start of a brand new series.

There is some pretty impressive characterisation going on within these pages as well. All of those being held prisoner inside the Lord’s Castle dungeon are being fleshed out and given very distinct personalities. Some you like othe’s you loathe and a few that are up in the air and all around I have to say that they make for one of the most misfit band of brothers as we’ve ever seen. It is also here we meet the Ogre and see that he’s chained up to a dead man whose ghost only he can see and here. A sore point among the men in the cell with him by the way. 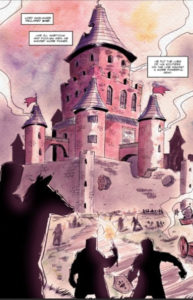 The interiors here aren’t what I was expecting either and again I’m absolutely delighted by that fact. From the first look at the castle through the last page I really like what Shawn delivers. First instinct was that the castle had a Barbie look to it and then as the colours continued to have these great purple and pink pastels, two colours I happen to love, it belies the whole severity of what is being experienced by the characters and it’s bloody good stuff. The utilisation of the page layouts and how we see the angles and perspective in the panels shows off a strong eye for storytelling. Backgrounds are utilised well and give us a great sense of size and scope of the story as well that somewhat claustrophobic feel of the cell. The linework is nice and the use of the varying weights he uses to create hard or softness is impressive to me. 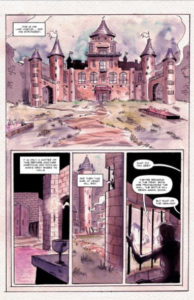 I think this story is pretty amazing and these creatures of the North who know that an Ogre was part of the group that escaped the castle’s destruction adds a new element. Also that the Ogre, who needs a proper name so I shall call him George, has a human conscience guiding him into doing things that are against his inherent nature well that’s fun. There is some wonderful under the radar almost black humour going on here and a leader whom I have yet to figure out. But this misfit group of men are on the run together now and I cannot wait to see how they grow, evolve and come to be something akin to a family. 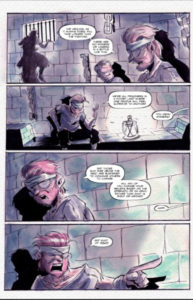 ​This is going to be the most unusual, unique and ubiquitous book you’ll find on stands so make sure you find one for yourself!

Summary: A reclusive beast sits locked in a castle prison cell with the ghost of the corpse he is chained to. And now he must decide if he’ll join in on an escape plan that could set him on an adventure he’s not prepared to embark upon.