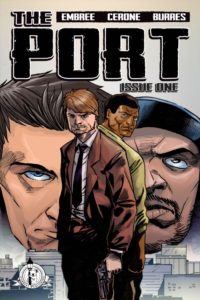 I’ve always enjoyed a good Cop series, that ‘ground-level’ feel to a book that you see in episodic TV series’ such as “The Shield” and “The Wire”, films like “Training Day” and the lesser-known, James Ellroy-penned “Dark Blue”, stretching beyond a case to solve. They’re very much character-driven stories, which branch off into multiple directions, “The Port” seems to be flowing in that manner.

Writer Richard Embree clearly loves what he does and gives us the set-up we need, establishing the main characters of the book, and a little bit on each others lives, without over or under-selling them. It’s paced well and we have room to breathe in between scenes.

Hard-boiled Detective Frank Dixon has a new partner, ‘clean-cut’ Detective Jason Monroe. Who’s a little too idealistic for Frank’s taste, leading to an early confrontation over Monroe consoling a victim’s mother, on whether he’s making assurances he may not be able to keep, which is healthy for the story. Unlike on certain other occasions where I’ve seen a play-off on the difference between characters, which quickly become cliché. In an exchange of just a few sentences, we understand the perspectives of both Dixon and Monroe, there’s intelligence and reasoning here, but despite Dixon’s initial perception, Monroe’s back-story is anything but ideal. This gives a perfect opportunity to show psychological differences in a complex way, that how you deal with difficulties in life is as relevant as the issues themselves. I really hope Embree expands on that thought as the series progresses.

Gangster Reggie Coles has just been released from prison, and is someone who wants out of his old life and to be with his family. Faces from his past show up, wanting to know where he stands with his old crew, an uneasy air forms when Reggie discusses debts owed and his choice of replacement; Terry, which does not sit well with his old connections. Terry offers to help Reggie get out of the life, but when a fatal ‘accident’ occurs, events take a serious turn with a revelation that leaves this issue with a cliff-hanger ending.

Overall, this is a good first issue, although one point; it’s a pity Nicolas Cerone’s art looks rushed in places, possibly due to scheduling dead-lines. I’d like to see him take a little more time on art chores, some profile shots need particular attention, but it’d be worth waiting on. It’s a series that would work well in volumes and the points where Cerone’s work is good, it’s very good, echoing early Denys Cowan and Eduardo Risso, with the grit of Klaus Janson. But despite the critique, Cerone shows promise, there’s definitely a style brewing here and a book that shows a lot of potential.

Editor’s Note: Interested in finding out how to acquire yourself a copy of The Port? Head to the Facebook page today!

Summary: The Port is a modern day crime-noir where the city is the lead and any character can die at anytime. Take a dive into the depths of the city full of crooked cops, drug kingpins, corrupt politicians, and religious scandals. If you’re a fan of gritty police stories and street tales, then this is a read for you.