When you’ve got the potential for any number of things to happen with a variety of historical figures in Hell, you need the likes of Mike Phillips and Julian Darius to pull it off in the pages of Necropolitan! And those very same fellas are joining me here today in an all new Mind Meld to discuss that very title!

1. Hello there, and welcome to the Mind Meld here at IndieComiX! For those who may not be familiar with the two of you and your works, could you tell us a bit about yourselves? 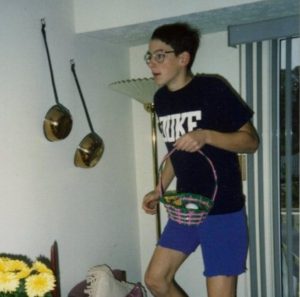 MP: Mike Phillips: By day, I’m a teacher, but my true passion is comics. I was lucky to join up with Julian Darius in the early Sequart days, and I worked hard and stuck around long enough to rise to the position of Editor-in-Chief there. Since then, we’ve published 30 books and 7 documentaries on comics history. So when Julian started making his own comics with Martian Lit, I mentioned to him my idea for Necropolitan, and he liked it. I also told him that I was pretty inexperienced with scripting, and he awesomely offered to co-write the series with me, which I very much welcomed (because he’s as demented as me).

JD: Comics fans might know Mike and me from the Sequart Organization, which has championed comics as a legit art for two decades. We’ve published dozens of books, did documentary movies (like She Makes Comics and Diagram for Delinquents), and tons of online work. A few years back, I decided to finally make comics myself, and Mike got involved too. The result was our first comics collaboration: Necropolitan.

2. Mike, as you came up with the idea for Necropolitan, how exactly did it end up coming about?

MP: Necropolitan is Warren Ellis’s fault. He’ll have no idea what you’re talking about, so don’t ask him. But it is his fault. You see, when we (Sequart) were making the documentary Warren Ellis: Captured Ghosts, something Warren said stuck with me. He was being asked about the titular characters from the comic The Authority:

Interviewer: Do you think there is anything virtuous to them at all?

Ellis: If there is virtue to them, it’s often only in relative terms. I mean, Hitler looks like the good guy if he’s beating up Satan.

I couldn’t shake Warren’s comments. They loitered. They festered. They eventually consumed. A tyrant like Hitler as the good guy? Now that would be an interesting (and hard) story to write. Could an audience be convinced root for an utter asshole?

I stayed with the Hell motif, and the questions kept coming: What would happen if all of history’s worst people were forced to live together? What if the Devil gave up, like in Gaiman’s The Sandman, and all of history’s most notorious people battled over the throne of Hell? Genghis Khan? Caligula? Robespierre? Hitler? Jack the Ripper? Clans? Turf warfare? Hmm…

A freestyle recipe started to form: Demons, for sure. A touch of supernatural powers, because why not? Toss in a loose interpretation of Milton’s metropolitan capital from Paradise Lost, Pandemonium, and now we have something.

Then I started really messing around, throwing in names that weren’t immediately obvious, just to see where my brain would go: Aleister Crowley? That’d be fun. Thomas Edison? Ooohhhh… 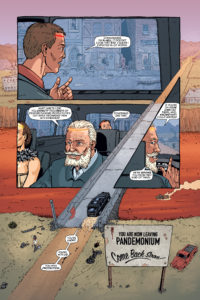 3. Julian, you mentioned documentaries such as She Makes Comics and Diagram for Delinquents, can readers find these on something like Netflix? Or do they have to go a little further then that in order to watch them? 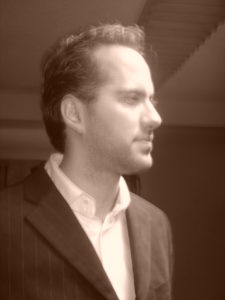 JD: She Makes Comics is indeed on Netflix! Grant Morrison: Talking with Gods and Warren Ellis: Captured Ghosts are available in full on Sequart’s YouTube channel. Diagram for Delinquents is available for sale at Sequart.org. Our other movies are available on Amazon and elsewhere, depending on what the distributor has done with them.

4. As the Kickstarter mentions long term plans for Necropolitan, does this mean we’ll perhaps see the title reach up to 10 or more issues?

JD: We’re definitely planning 10 or more issues! In fact, I’ve already finished a prequel script, which might be three issues on its own. Mike’s currently working on a three-issue story. And we’ve got several stories planned. In fact, we’re currently thinking in terms of “act one,” which culminates in a big change to the status quo somewhere around issue #12!

5. Thanks to the potential Necropolitan has, how much fun has it been for the two of you to do?

MP: Yeah, it’s been a ton of fun! Being able to pair up all of these historical figures in this wacky setting has led to some hilarious (and fruitful) conversations. In my opinion, antagonists are usually the most interesting characters, so I figure if one antagonist is fun, two antagonists are twice as fun. And obviously, that logic leads to: “The most fun should be had when most/all of the characters are bad.” The fun is exponential! 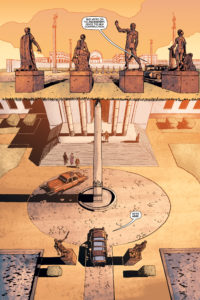 6. Mike, as you mentioned being inexperienced at scripting, would you say that’s become a thing of the past now thanks to you and Julian working together on Necropolitan?

MP: I wouldn’t say it’s a thing of the past just yet! It’s been a crash course for sure, and I still will defer to him in all things “script construction” for a long time to come, but I get the gist. And just getting the gist was an important hurdle for me, as I used to rationalize not writing because “I don’t know how to do it” gave me the excuse to not do it. But thankfully Julian wasn’t having it. He threw me into the deep end and wouldn’t let me make excuses. And him having that confidence in me has led to me scripting Necropolitan #4-6 on my own, which I never would’ve done without him cheering me on. In fact, as an experiment, I started scripting a brand new series, solo, and it’s been a cathartic joy. 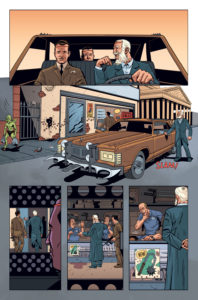 7. In the event the Kickstarter for Necropolitan doesn’t hit its goal, will this hinder you guys in any way?

JD: Yeah, if the Kickstarter doesn’t make its goal, we’re in real trouble. Making comics is terribly expensive, and I’ve wracked up an absurd amount of credit card debt doing this — in addition to what we’ve paid off or paid directly from our own money! Realistically, the Kickstarter is only going to subsidize production, even if it’s successful. And if we can’t do that, we’re kind of sunk. Or at least, we’re waiting years between issues, paying off debt and waiting to have the cash to do another issue.

I also see the Kickstarter as a kind of “proof of feasibility” test. If we can’t subsidize the costs to the extent of the Kickstarter’s goal, it probably doesn’t have the audience it needs to be viable. 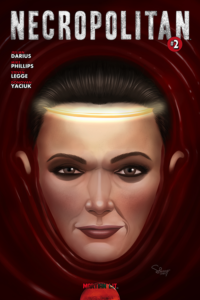 8. As you both mentioned the Sequart Organization, are you both still with the group?

JD: We’re both still with Sequart! I’m still in charge, and Mike is still Editor-in-Chief. We do work for Sequart almost every day! Our most recent book was The Cyberpunk Nexus: Exploring the Blade Runner Universe, a massive 416-page tome on the entire history of Blade Runner, its sequel movie, the related comics, and everything even remotely related!

9. How bad can we expect to see the violence get in Necropolitan?

JD: Necropolitan is pretty violent. That said, I don’t think Mike and I have ever tried to add violence for its own sake. It’s all for the sake of the story. Having said that, this is Hell, so things are pretty messed up. And of course, people heal, so there’s bound to be more violence as a result, since the consequences are less.

In issue #1, our protagonist Mark has barely arrived in Hell when his throat is slit. The point of the attacker — Jack the Ripper — was to put Mark in his place. From a narrative standpoint, it also lets us establish that people heal and explain a little of how this works. There’s actually not a whole lot of violence in issue #1, but it feels really intense and violent. In issue #2 and the forthcoming #3, there’s more violent conflict.

But again, the level of violence depends on the story. In the prequel story I mentioned, there’s not a ton of violence — or at least, it’s small-scale incidents between individuals. In the story Mike’s working on now, there’s a wild melee that’s totally over-the-top. We certainly feel free to include some pretty violent things, but we’re not going out of our way to add violence for its own sake. It’s always at the service of the plot, the characters, and establishing this world.

Many thanks to Mike and Julian for taking part in this interview! It should also be mentioned that the Necropolitan Kickstarter was a success! Be sure to check out the Martian Lit website for further updates on Necropolitan!