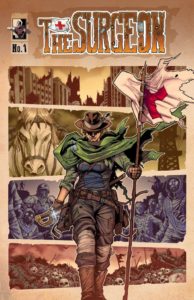 Back in August I was sent the first two issues of UHStudios’ The Surgeon by John Pence himself. Naturally, I took a bit of time to get around to reading the issues he was awesome enough to give me the opportunity to check out. And naturally, like in a majority of cases, I end up regretting not reading this sooner like I should have. I found The Surgeon to be a very enjoyable read, especially with how relaxed John Pence’s writing is. Even when things get to be fairly serious in the first two issues. I don’t know if this was his intention or not but regardless, I like it. We’re basically in a post apocalyptic world with no explanation as to how or why that happened and its kinda weird but refreshing at the same time. There’s no big explanations aside from a few hints here and there to how things happened and perhaps maybe a shout out to the video game series known as ‘Fallout‘. Its just great and like I said, relaxed.

Dr. Jenny Hanover, a traveling Doctor (and our leading lady) who can heal, kickass, and possibly do both at the same time. Is someone I came to quickly like and isn’t overly sexualized in her appearance courtesy of Zachary Dolan. The fact she has scars on her face and she’s not bitter because of it is rather nice to see. Or perhaps she is and hides it really well, who knows! Her main (and constant companion) is a horse named Old Paint and he’s not a horse you want to annoy as a few people learn later on in issue 2! Which was rather eye opening for me as its not often I see a horse capable of being such an ass kicker! Makes you wonder how he got to be that way as well! I have to admit though, that I was kinda suspicious of the folks of Turtle Island after Hanover comes across them in need of a Doctor. As they seemed somewhat well off and perhaps a bit off kilter in some ways that you just can’t help but feel suspicious of them up until the end of the first issue. 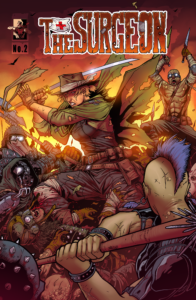 Folks who’ve already read these first two issues will more than likely get what I am talking about. But those who haven’t read this title yet, should get on with doing that! As otherwise, you are missing out on a wonderful little title right here in The Surgeon. Eve Orozco in my view does an absolutely fantastic job with the colors, a line of thought that cements itself during a big fight in issue 2 with a gang that is made up of perhaps the most screwed up people to ever come to be about in a post apocalyptic world. His colors brings Zachary’s art to life during this so well in my honest view and I hope he sticks around until the series’ end. Which is hopefully a long ways off from here as this has quite the potential to be around awhile. Especially since Doc Hanover isn’t exactly the type to settle down! Why that is, is unclear but perhaps in future issues we’ll get to learn why that is.

I love that despite her brashness and crude language, Hanover does care and probably deep down, would rather be spending her time healing folks instead of having to kill folks as she’s been forced to do in order to survive. The folks of Turtle Island are an interesting bunch with some great personalities, which I have to say John did a great job in writing them. It would be interesting to see some of their histories be explored in future issues and how the dynamic would further change for them if Hanover was to stay permanently. That is if things don’t fully go to Hell in a handbasket after the events of issue 2 where a certain gang is concerned. I’m also left wondering if one of the gang members ended up getting eaten by his own people at one point since they got some cannibalistic tendencies and all! The Surgeon is a title worth reading so please, do check it out as soon as you are able to do so! You won’t regret it! And the best part is where this title is concerned? Is that its available in print and digital!

Summary: A nomadic physician in the postapocalyptic American West finds a place that needs her to stay. She doesn’t want to be tied down. By now, she might be better at killing than she is at healing, and you can sense that maybe there are some conflicts in this setup.