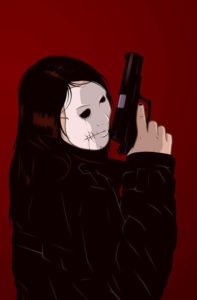 I was intrigued about Hollow Girl the moment I set eyes on those first preview pages from Luke Cooper.

The story of a young girl who years earlier, killed both her Parents, a psychotic killer with no emotional responses, she has become a vessel for the dead, exacting retribution upon the most loathsome of predators walking the Earth.

The basics of this Graphic Novel revolve around flashbacks, 6 years prior and the modern day, where we see the back story of Katherine Harlow becoming the eponymous Hollow Girl. She’s a bit of a strange one, this girl, talking to the dead, dispensing with gangbangers and, well, just about anyone else in the way, in fact, they don’t even have to be in the way, just in the vicinity.

Now okay, I know what you’re thinking, with a premise like that, you’ve seen this before, right? I mean, we’ve all seen the “cold psychopath” films, “the Avenging Angel”, blah, blah, blah, blah blah.

Sure you have – and you loved every minute of it too.

Hollow Girl is one part “Halloween”, one part “Sin City”, rendered with the sweeping tones and emotion of Charlie Adlard (The Walking Dead), the chic of French animated classic, “Renaissance”, swinging wildly at you with the frenetic pace of “Shoot ‘Em Up” and putting all to rest at the end with the temperament of “The Crow”.

And if you think it owes an apology for any of that, it doesn’t care what you think. It proudly sticks up it’s finger and gives you “the bird”, tells you to sit down, shut the **** up and enjoy the show.

The book is a fast-paced, slick, thrill-ride, you love those films and Hollow Girl knows it. But there’s no emulation here, no, Hollow Girl has a voice, style and thought all of it’s own.

This is modern Noir at it’s finest, it’s eyes bury deep into you, moving with an unrelenting pace, a precocious upstart that tells you it belongs on your bookshelf with “The Walking Dead”, Brubaker and Phillips’ “Criminal”, Jim Zubs’ “Skullkickers” and Aaron and Latours’ “Southern Bastards”, and frankly, you’re not inclined to argue with it.

This book has “Next Big Thing” written all over it, Luke Coopers art is clean and toned, one of those very rare books where you couldn’t imagine it in colour, it just wouldn’t work quite as well. Full of tonal greys and lighting effects, this is a master-class in how to do a black & white publication correctly.

All the best with this, Mr. Cooper, one of those rarities where the hype is justified.

Are you still reading this? Well, what are you waiting for? GO!!

Summary: Six years ago, little Katherine Harlow killed her own parents. Showing no signs of remorse or regret, she was said to be a girl without a soul… A Hollow Girl. Now, wearing an expressionless white mask, Kat kills for the dead, a willing vessel for the souls of the wrongfully killed. But how did a disturbed little girl become a brutal vigilante? And are the voices that she hears really those of the dead, or symptoms of a dangerous, all-consuming psychosis?