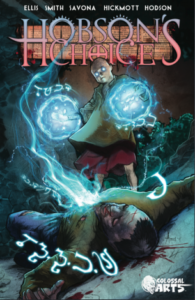 Despite the 9 pages of art and story we’re given, Hobson’s Choice gives us a little something to chew on, as the first thing you notice is the quality, the production values are crisp and beautiful. Frankly, it took long enough to get past the gorgeous cover. Erik Hodson’s colours and Warwick Doolan’s flats generate a pastiche of water-colour tones and light with some sedatory fades and blends, and rightly so.

In all honesty, the cover logo alone is a work of art.

The art team for #0 is Mark Savona on pencils, with Michael Hickmott providing the inks. Savona’s main strength is in the story-telling, there’s ambition throughout, coupled with the aforementioned colours that bring atmosphere that’s apocalyptic and claustrophobic in places. We’re left with a sense of fore-boding and an understanding of why our eponymous hero is on the run.

The synopsis on the story reads;

“Jake Hobson was orphaned soon after birth and left at the gates of the Church. At a very young age it was apparent Jake was different.

Jake was sent to live in relative isolation with his guardian but it was only a matter of time before he would be reunited with the Church. The Pope recognized Jake’s skills and powers were developing and that others would soon seek Jake out. You see, angels and demons will vie for his power and influence in the world. Will humans help or simply be fodder?

Jake realizes he has no real choices in life despite the world of alleged free will. Hobson runs away in an effort to become anonymous, alone, free to make his own path in the world. But can he truly ever have free will or is his destiny fixed?”

Now that’s an interesting hook in itself, but the real sell for this book is waiting in the final pages, where we see the sketches of regular series Artist, Erwin J. Arroza. Whose pencils can be described in one word: BEAUTIFUL.

I’ve had the pleasure of viewing interior pages in advance, Arrozas art is unique, structurally, we’re talking Paco Medina (Ultimate Comics X-Men), with a little bit of a hint of Humberto Ramos (in fact, I was quite the fan of Ramos’ series “Crimson”, there’s definitely some of that energy being channelled here). Coupled with Simone Bianchi’s patina washes and lighting that smacks of Dell’Otto and Deodato in places, yet none of this appears to have any deliberation in Erwin’s work, his style is distinct in it’s own right. 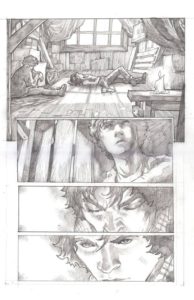 Having spoken with him directly, Erwin is remarkably humble, warm, well-mannered, and good natured, there’s no pretence or arrogance to him at all, which is very much reflective in his pages.

Mark my words on this; Erwin J. Arroza is going to be HUGE, Hobson’s Choice is going to be huge, the Kickstarter project for the first issue alone went well over the required target figure. If the standard being set by ColossalArts EIC, Keith Andrew Smith and co-owner and series Writer, Mike Ellis are anything to go by, this is one independent publisher that is going to live up to it’s name.