Back on November 15th, 2017, I had the pleasure to interview Greg Pak right around the time his Mech Cadet Yu series at BOOM! Studios was beginning. And now, around roughly a year later, I have the pleasure of doing so once more now that the series is finished. Plus, the chance to pick the mind of BOOM! Studios editor, Cameron Chittock as well! With that said… Let’s get to it!

1. Hello there! And welcome back to the Mind Meld here at IndieComiX! Issue 12 (the final issue at that) of Mech Cadet Yu has finally come, bringing with it the conclusion to a story that began just about a year ago by you and Takeshi Miyazawa. Having said that, how are you both feeling about this right now? 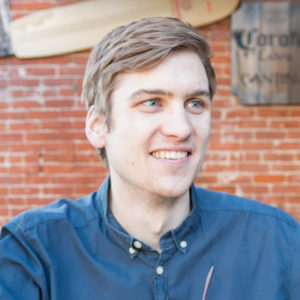 Cameron Chittock: It’s bittersweet! I already miss reading Greg’s scripts and seeing Takeshi’s pages as they come in. Greg and Takeshi are two of the best in the business and it’s been such a blast seeing them work their magic up close. But overall, I’m just incredibly proud of the series and to have been even a tiny part of it.

GP: The whole experience has been incredible. This has been one of my favorite books I’ve ever worked on in my entire career, with some of my favorite collaborators ever, and it might be the best reviewed series I’ve ever worked on, so it’s bittersweet but hugely gratifying at the same time. Thank you so much to everyone who’s been reading the series and spreading the word – we never would have been able to run as long and far as we have without your support! From the beginning, I had an epic ten issue story planned out, but we were only approved for a four issue mini. But because of your support, we got the greenlight for twelve big issues and got to do everything we dreamed of from the beginning. Thank you!!!!!

2. Do either of you, Editor Cameron Chittock included, think fans will be satisfied with all that happens in the final issue? Or perhaps let down in some way?

CC: Part of an editor’s job is being a book’s biggest fan and I can happily say that I thought the team totally stuck the landing with this one. I don’t always read reviews but it was hard to avoid the reactions to the series finale and so far, I’ve seen nothing but moving, celebratory tributes to the series. 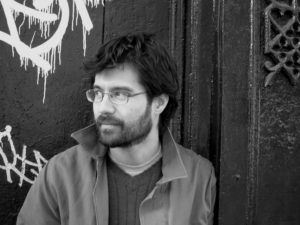 GP: Having a clear plan from the beginning helped a lot with that, but I want to single out Cam for special praise and thanks here. When I was diving into writing this last issue, Cam’s big piece of advice was to leave lots of room at the end to give our last goodbye to these characters time to breathe. Those last four pages of the issue are the result, and I can’t thank him enough for that nudge and permission.

3. Cameron, you mentioned back in August that you were basically looking forward to seeing how fans react to each character’s evolution as the story went on, would you say you got exactly what you were looking for?

CC: Absolutely. As much as I love the giant action sequences, the characters have always been my favorite part of the series. Takeshi saved some of the best action for the final issue but it’s the quiet character beats at the end that stay with me and I hope those moments resonate with fans as well. 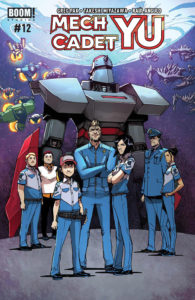 4. Now that issue 12 has come and hit the stands, and I’m sure this is something many a reader, myself included, are seriously wanting to know… Will there be more to come of the ‘Mech Cadet‘ universe? As certain questions remained unanswered by the end of the story. Such as where the Robos came from, how is it they know who is the right fit for them, and how exactly the Sharg got equipped with technology capable of taking them to Earth.

GP: That’s all stuff I deliberately set up to explore later down the line in the hopes that we get to revisit this world – cross your fingers for us!

I’ve also been thinking about it, and even if we were never able to tell more stories ourselves, I kind of love that those questions remain in readers’ minds. Some of my favorite comic series leave a bunch of questions unanswered – I kind of love stories that leave some doors open so you have something to mull over and think about.

5. If there is a continuation, will we see General Felix continue to push for punishments against Stanford and the others for disobeying orders?

GP: SPOILER ALERT: General Felix kind of shakes her head and admits defeat at the end of the series. But do you really think she’d give up that easily? Maybe someday we’ll find out… 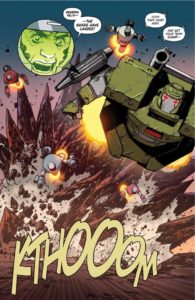 6. Considering both Generals Felix and Park are both suspicious against the Robos, is it possible they are justified in feeling that way or just entirely paranoid?

GP: I love stories in which the antagonists have a world view that actually might make sense. I’m not talking about justifying the atrocities of sociopaths. But I love stories like PRINCESS MONONOKE in which the antagonists have actual ethical and moral codes. So I like the fact that Felix and Park have questions that can’t be summarily dismissed. 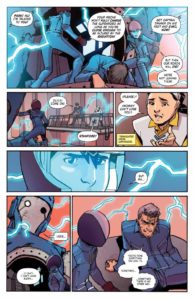 7. Greg, what can fans expect to see next from not only you but Takeshi as well where BOOM! Studios is concerned?

I’m thrilled to report that Tak and I are collaborating on THE PRINCESS WHO SAVED HER FRIENDS, a children’s book based on the song by Jonathan Coulton that’s a sequel to our book THE PRINCESS WHO SAVED HERSELF! We’ve got two more awesome MCY alumni working on the book – colorist Jessica Kholinne and letterer Simon Bowland, and while it’s a different genre and medium, it’s got a ton of the same kind of humor and heart that’s at the core of MCY. So if you’re looking to see what we’re up to, please do check out the Kickstarter! 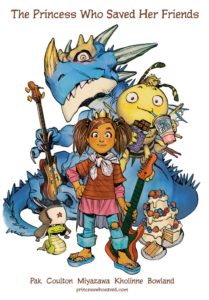 And Cameron and I are collaborating on a new project for BOOM even as we speak! In fact, I’m supposed to be working on that script right now, so I’ll scoot. But please do keep your eyes and ears open – I’m hoping we’ll be able to announce it soon!

Editor’s Note: Huge thanks to Greg and Cameron for taking part in this interview and its definitely looking like we’re in for a treat or two!  Interview by: Rob Wrecks