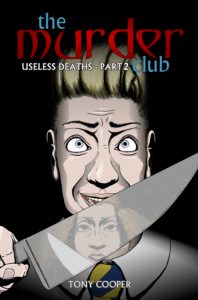 Cooper’s second installment of his crowd-funded graphic novel is an entertaining read yet it falls a bit short of his previous offering. “Murder Club Part II: Useless Deaths” continues the story of Tom and Lisa as they follow through with the murder of Edward, a classmate that they feel deserves to die and, as a bonus, would only be doing the world a favor by offing him. Lisa is of two minds on the matter, curious to follow through with Tom’s plan but apprehensive enough to be wary of its outcome.

Picking up where part one left off, Lisa goes to Edward’s house where she expects to find a depressed Edward, nearly ready to kill himself, but instead finds an extremely horny Edward who believes he has a right to have sex with Lisa, a promise that Tom has apparently made him. Tom shows up and kills Edward before he can rape Lisa and we learn that he never intended for Edward to die in an “accidental” way but instead set up Lisa so that they would have an actual reason to physically kill Edward. The two then form a partnership—albeit an apprehensive one on Lisa’s part—and frame another student for the murderous deed. From there things get a bit more twisty and we found out Lisa isn’t as “innocent” as we are originally led to believe.

As to the artwork. Like its predecessor, Cooper’s utilitarian illustrations are serviceable and work to get the job done fine. If detailed artwork is your thing, however, you’ll be disappointed as there’s an overall lack of it here. But, ultimately, it’s the scene setting of “Murder Club” that matters; the philosophy of the message is what’s important, not the art. The story could be as easily told as a play or short story. Although, I will add that the black and white style does suit the story well, at times even giving it something akin to a “noir” feel, which is apropos of such a dark book. 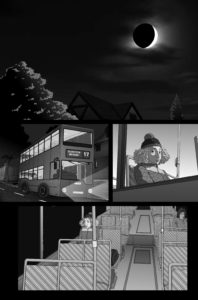 As I said, this second entry into the series falters a bit, whereas the intrigue and thrill of the duo’s planning in the first part one really propelled the mystery. But, if nothing else, “Murder Club Part II” is an interesting story and should generate curiosity into such light-hearted subject matter such as the philosophy of death, morality, rightness and wrongness. Cooper doesn’t get deep here, and that’s, perhaps, a good thing. He takes some very heavy philosophical topics and boils them down into comic-sized chunks that are much easier to grasp than any ol’ musty old tomes you might find at the library (though not that they aren’t worth checking out!). Overall, the series could most likely be trimmed down to a single volume by cutting a bit of the fat around the edges; for example, there’s a considerable amount of talking heads but little action after the initial murder of Edward. Actually, in this, TMC could be made a meaner, leaner, more impactful experience. But regardless of its length, TMC is an enjoyable way to spend some comic book reading time outside the realm of the usually capes and tights titles.

Editor’s Note: Interested in grabbing up a copy of ‘The Murder Club: Useless Deaths Part 2‘? Then head right here for your digital copy!

Summary: Convinced by Tom to kill a fellow student, Lisa makes her way to the boy’s house to deliver the fatal stab and plant evidence of a drug deal gone bad. However, she soon finds herself alone, in danger, and wondering if this was Tom’s plan all along. 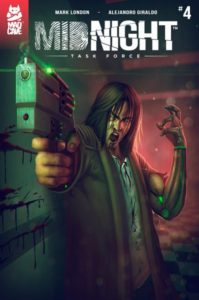 Summary: The Flayer has infiltrated the police station and it’s up to Aiden and the Midnight Task Force to catch the killer before he escapes. Will the task force prove successful or will Axel Black get what she’s been after all along?

After having read this issue to its (evil!) cliffhanger until issue 5 comes out, its easy to see that Mark London definitely saved the best for last to end things on a high note. Not to mention leaving one quite worried for our man Aiden! The wait to get to this point has been absolutely worth it in my view and I strongly wishing the next issue was already out for me to read! Things started to get pretty wild for Aiden and friends in the final pages of the third issue, not to mention a bit bloody for one unfortunate soul. Issue 4 continues where all that left off and its clear its not just one person working alone! The figures we get to see here in this issue are all ones I would definitely NOT want to come across on my own in an alley. Or, well, anywhere else pretty much for that matter! It has me curious as to how these dangerous (called Flayers) figures ended up in the way that they did.

Is the lovely Ms. Black responsible or is it someone else that’s connected to her in someway that is actually responsible? Only Mark knows and hopefully we won’t be kept wondering for too long where that’s concerned! Its great to see the team that Mia brought with her in action, though it would have been nice to see her being in action as well instead of what she ended up doing. Though perhaps with the issue’s ending, we’ll see that in future issues. Mia’s team are all quite capable in their own ways and I hope we get to see more of that in the future. Hunter especially isn’t about to let himself get brought down by three different weirdos! Sure, might not leave him as pretty in the end but at least he’ll be better off then Detroit’s Police forces at any rate!

Alejandro Giraldo and Christian Ospina continue to work wonders in their respective creative duties in my view. And hopefully both stick around for the next arc in the series as otherwise, not having Alejandro’s art (and colors?) just wouldn’t be the same! Another question I have is if whether or not the lovely but possibly quite deadly Ms. Black has more Flayers at her disposal. If she does, I can only imagine how much more worse they are then what we’ve currently seen so far! One thing is clear however as we reach the ending and that’s that Aiden suffers a serious blow where a certain issue of his is concerned. How he recovers from that (unless Ms. Black has her way) will be interesting to see and if it’ll help him grow as a character. Though there’s no telling how much worse things will get before Aiden see’s a light at the end of the tunnel!

Mark held nothing back in this 4th issue and I for one am grateful and satisfied and I believe you will be as well once you’ve read this issue! Just what exactly does Ms. Black have such an interest in Aiden for? The potential scenarios to think of in relation to this are gonna be fun to think of as the mystery of it all stays firmly in place until more issues comes out! Now, be sure to not miss this issue when it releases on October 3rd. Or otherwise, a Flayer might come for ya!