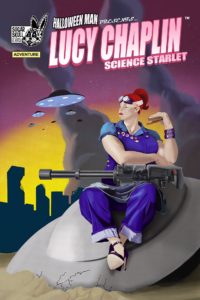 I will say up front that I have very limited exposure to Drew Edwards’ Halloween Man. And that is more than likely a crime as its clear Drew is putting quite the effort into this world of his. Especially with this Lucy Chaplin special he’s done up in recent times. The fact Lucy is a plus size woman (and modeled by Jamie Bahr) is pretty freaking awesome and I’d be down to read more of Lucy’s adventures in the future. As you don’t see plus size women all that often in comics in roles you’d typically see for a male or an insanely hot woman. I love plus size women and even if it wasn’t or that, I think I’d still be completely open to what Drew has done with this special. Making me want to try and find previous works of his related to Halloween Man that feature Lucy. The fact she’s not only a plus sized beauty, but a genius who can kick some ass is also awesome!

Which we get to see a bit of here in the pages of this special and the one whose ass is getting kicked definitely deserves it. As Samson and his attitude about women was the only thing I didn’t like about this special. As that kind of thinking went out the door a long time ago and needs to stay out. Its unclear what made him finally snap and go for the God in the Sun, but I don’t think anyone would really care too much given the kind of person he is. I love that Lucy isn’t no damsel in distress, nor that the other women seen in the pages of this special are damsels in distress. Sure, Lucy easily could have waited for Halloween Man to get done with his Vampire business in Louisiana, but that wouldn’t have made for much of a story if that happened. Or give more to the way of Girl (Plus sized!) Power for that matter. 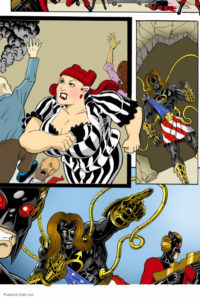 I’m glad Drew reached out to me about reviewing the Lucy Chaplin special as it was a different but enjoyable (aside from Samson’s old views) read. Evan Quiring, Paul Tuma, Celina Hernandez, and April Guadiana all do terrific jobs in helping bring this comic to life and I honestly wouldn’t mind seeing more of their work again in the future. And who knows, perhaps I will! I’m curious to see what Drew has in mind next, especially where this ‘Bat City Special’ is concerned! And will Samson make another appearance? Not if he doesn’t want his butt and his old styled thinking kicked he won’t! So if this has your attention, and you’ve perhaps been looking for something featuring a plus sized woman in the leading role that’s not raunchy in some way or what have you, give this a try! As you won’t regret it! You can also check out Jamie Bahr’s Facebook page to see all of what she’s up too! 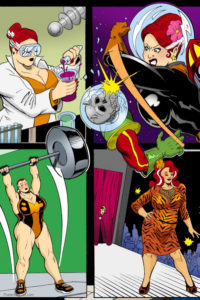 Summary:  Because YOU demanded it! The break-out bombshell of the long running underground comic HALLOWEEN MAN at last has her own special!

The world’s smartest woman takes on her toughest foes yet, as the radical terrorist group known only as the Sons of Samson unleash a fiendish plot against women everywhere! Also, venture into Lucy’s lab and see some of her favorite inventions! Both of these ALL-NEW comics, plus a special cosplay photo shoot!